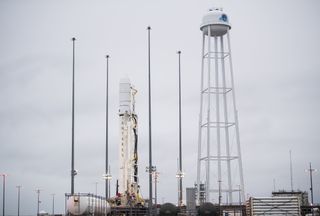 A Northrop Grumman Antares rocket carrying the Cygnus NG-13 spacecraft sits atop Pad 0A of the Mid-Atlantic Regional Spaceport at NASA’s Wallops Flight Facility on Wallops Island, Virginia on Feb. 5, 2020.

WALLOPS ISLAND, Va. — The number 13 may have a bad wrap among the superstitious, but Northrop Grumman is taking it in stride as the company prepares to launch its 13th Cygnus cargo flight to the International Space Station on Sunday (Feb. 9).

The weather forecast sure seems lucky. There’s a 95% chance of good weather for Sunday’s launch. Liftoff for the Cygnus NG-13 mission is set for 5:39 p.m. EST (2239 GMT) on a Northrop Grumman Antares rocket from Pad 0A of the Mid-Atlantic Regional Spaceport here at NASA’s Wallops Flight Facility. The weather forecast does fall to a dismal 20% chance of good weather on Monday, if Northrop Grumman has to delay the launch 24 hours, agency officials said.

You can watch the launch live here and on Space.com’s homepage, courtesy of NASA TV, beginning at 5 p.m. EST (2200 GMT). The spacecraft is scheduled to arrive at the space station in the wee hours of Tuesday morning (Feb. 11).

In a coincidence, Sunday is a busy day for space launches.

In addition to Northrop Grumman’s Cygnus launch, NASA and the European Space Agency will launch the powerful new Solar Orbiter on a mission to study the sun’s polar regions. That mission, which will launch atop a United Launch Alliance Atlas V rocket, will lift off at 11:03 p.m. EST (0403 GMT Feb. 10) from Cape Canaveral Air Force Station in Florida.

“With this launch, we do not have any conflicts,” said Jeff Reddish, NASA’s Wallops launch range project manager for Antares. NASA’s Solar Orbiter launch webcast will begin at 10:30 p.m. EST (0330 GMT).

Cygnus is packed with about 8,000 lbs. (3,600 kilograms) of supplies, science experiments and other gear to the space station’s three-person Expedition 62 crew, NASA officials have said.

In addition to that hard cheese, there’s some hard science riding up to the station on Cygnus NG-13. The spacecraft is carrying 2,293 lbs. (1,040 kg) of gear for 20 different science experiments to be performed by station astronauts.

That haul includes the Mobile Space Lab to grow tissues and cells in space, a bone-loss experiment to study the effects of microgravity exposure and a batch of genetically engineered E. coli bacteria that may produce a potential biofuel. There are also cowpeas aboard as part of a space food growth experiment and equipment to set a fire inside the Cygnus spacecraft (after it leaves the space station, of course) to study how fires can spread in weightlessness.

Northrop Grumman has named the Cygnus NG-13 spacecraft the S.S. Robert H. Lawrence to honor Air Force Maj. Robert Henry Lawrence, Jr., who was the first African-American ever selected to fly in space. In June 1967, Lawrence was selected to be an astronaut for the U.S. Air Force’s Manned Orbiting Laboratory, a military space station, but was killed on Dec. 8, 1967 in a tragic accident when his F-104 Starfighter supersonic jet crashed. He was 32 at the time.

Related: Manned Orbiting Laboratory: Inside a US Military Space Station

Northrop Grumman is one of two companies currently flying delivery missions to the International Space Station for NASA. (The other company is SpaceX.) NASA picked the two companies in 2008 under the agency’s Commercial Resupply Services program. In 2016, NASA selected them again, along with Sierra Nevada Corp., for deliveries under the follow-up Commercial Resupply Services 2 (CRS-2) program.

The NG-13 mission is Northrop Grumman’s second cargo flight for NASA under the CRS-2 program. It’s also the second flight of the company’s Antares 230+ rocket configuration, which can carry an additional 800 lbs. (363 kg) of mass than its predecessor, the company has said.

Sunday’s launch also comes just over a week after another Cygnus spacecraft, the NG-12 cargo ship, departed the space station on Jan. 31. That spacecraft will remain in orbit for a short while, marking the second time that Northrop Grumman has had two Cygnus vehicles in orbit at the same time.

Tonight, Northrop Grumman engineers will add some final cargo to the Cygnus spacecraft as part of a “late-load” process for sensitive biological experiments and other gear. The rocket will be hoisted into position early Sunday morning.

While NG-13 is Northrop Grumman’s 13th cargo mission for NASA, it’s the 14th launch of a Cygnus overall. A flight in October 2014 failed just after liftoff, with the Antares rocket exploding just above its launchpad. Northrop Grumman (formerly Orbital Sciences and Orbital ATK) launched two Cygnus vehicles from Florida on United Launch Alliance Atlas V rockets before resuming Antares flights from Wallops in 2016.

With Breonna Taylor protests, COVID-19 and record homicides, Louisville police are in crisis

CLOSE The single indictment handed down by the grand jury in the Breonna Taylor case has raised questions and an outcry. Here’s what we know about the charges. WochitLOUISVILLE, Ky. —  Officer Christian Lewis raced to the hospital Wednesday night after learning one of his best friends and partners, Robinson Desroches, had been shot during…

SEO and Google Ads aren’t just web magic. Businesses need to know them. This training can make them all clear

With Breonna Taylor protests, COVID-19 and record homicides, Louisville police are in crisis

CLOSE The single indictment handed down by the grand jury in the Breonna Taylor case has raised questions and an outcry. Here’s what we know about the charges. WochitLOUISVILLE, Ky. —  Officer Christian Lewis raced to the hospital Wednesday night after learning one of his best friends and partners, Robinson Desroches, had been shot during…