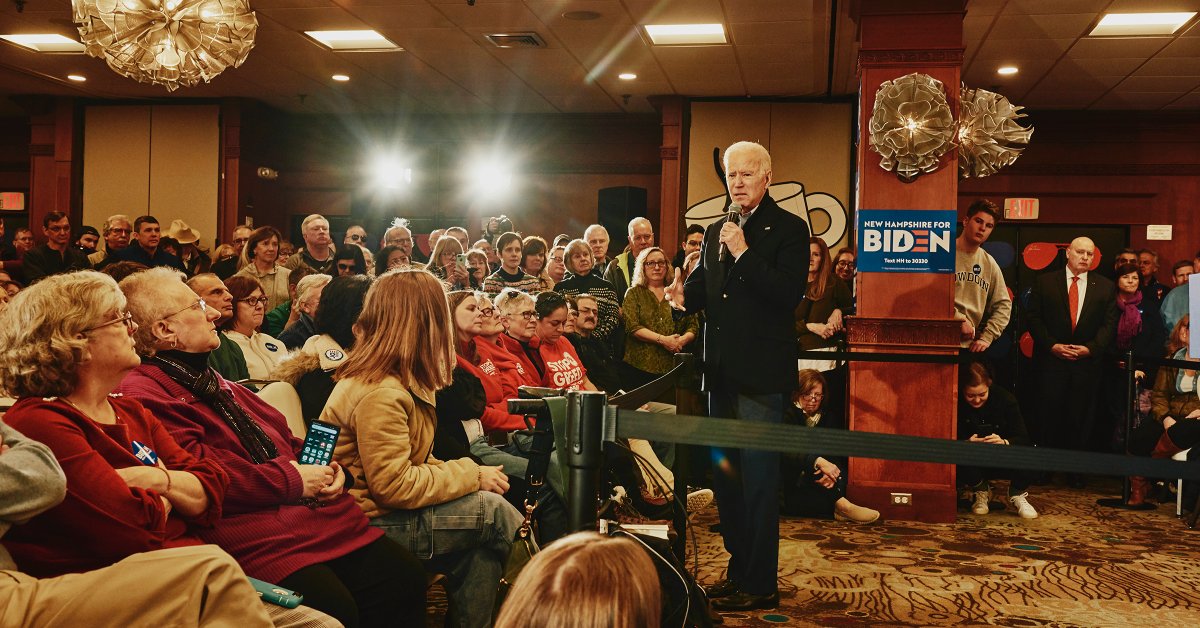 Biden told NBC News on the eve of the primary that he could probably survive a fourth-place showing here. Still, those around the former Vice President were skittish about what Tuesday’s results could bring, including the possibility he could slip to a distant fifth. Senator Bernie Sanders and former South Bend, Ind., Mayor Pete Buttigieg appear to be duking it out for the win, while Biden was jostling with the likes of Senators Elizabeth Warren and Amy Klobuchar.

“I think he’s holding his own, but it ain’t easy,” said state Sen. Lou D’Allesandro, a longtime Democratic figure in New Hampshire and a captain of Manchester’s political machine. “If Amy beats him, it’ll tell him to work a hell of a lot harder than he has been. I think the thing that killed Joe Biden is losing Beau.”

Beau Biden was Joe Biden’s son who died after a battle with brain cancer. He also worked on D’Allesandro’s campaigns.

Former New Hampshire Gov. John Lynch acknowledged Biden’s uphill fight ahead, saying the campaign would do well in New Hampshire but is heading toward friendlier states like Nevada and South Carolina. And New Hampshire political kingpin Billy Shaheen, whose wife is a Senator and former Governor, put it bluntly: “I’m nervous,” he said.

A sign for Joe Biden seen on a stack of chairs at a GOTV event in Hampton, N.H.

The official lines coming from Biden’s headquarters in Philadelphia were that early losses are surmountable. Iowa and New Hampshire are racially homogeneous, and polls suggest Biden will fare better in more diverse states, where he has built up enormous reserves of goodwill with black voters. Campaign aides are suddenly historical experts on 1992, when Bill Clinton’s upstart presidential campaign started 1-for-11 and 2-for-15 on his way to the nomination.

Rank-and-file voters, too, seemed indifferent toward the prospect of a Biden blow-out. “If he doesn’t win here, it doesn’t matter,” says Dan Bergeron, a member of the Manchester school board.

But it seemed an argument of necessity, as Biden’s one-time aura of inevitability has evaporated as his rivals worked harder and kept a busier schedule. He is getting out-spent on television and online ads. His get-out-the-vote machine is dwarfed by others. His events drew fewer people than his rivals, his fundraising lagged them and his energy did, too. Where his rivals sparked excitement, Biden sought sufficiency.

“I’m still not sure. He didn’t lock me down. I’ve been trying to get locked down, but I can’t get there,” said Nick Pangaro, a 68-year-old retiree from Hampstead, N.H., who is leaning toward Klobuchar. “I’m responsible for the rest of this country. The primary here is that important.”

After retooling his campaign leadership after his Iowa loss, Biden is tweaking other parts of the operation. He walked into his final event before New Hampshire votes to Carrie Underwood’s “The Champion” as a signal that he’s still holding onto hope — and pivoting to a soundtrack a little lighter on throwback tunes and a little heavier on Southern twang. One of the lyrics? “I am invincible.”

Biden takes pictures with supporters at his GOTV Event in Hampton, N.H.

Yet even those who have endorsed Biden’s campaign have nagging doubts about his ability to win. “There are a lot of people in New Hampshire who are hunters,” said state Rep. Ben Baroody of Manchester, who owns 11 guns and endorsed Biden last week. “I grew up with a gun in my hand. We have Democrats in the Sportsmen’s Caucus. If he’d leave the N.R.A. alone, he’d be doing better. He’s saying, ‘I’m going to get you,’ and that’s not helping.”

For his part, Biden is testing new lines, including a series of questions that look past the primary and toward a potential head-to-head with President Donald Trump, who was speaking across town in a sort of counter-program to the Democrats.

First, though, Biden will have to win the nomination. And his odds appear to be dwindling by the day. That’s why the campaign is using more and more of Jill Biden, the wife of the former Vice President, to offer some of the sharpest critiques of the campaign’s immediate rivals.

Biden’s team recognizes the need for a change in the narrative, if not the trajectory of the campaign itself. They are projecting confidence that thing will improve when the campaign moves beyond the early nominating states and into the bigger contests that start next month.

Still, though, confidence is not the overwhelming emotion in Biden’s crowds. Anxiety is.

Write to Philip Elliott at philip.elliott@time.com.

Why Coronavirus Seems to Be Striking More Adults Than Kids

For President Donald Trump, It’s Open Season for Getting Even