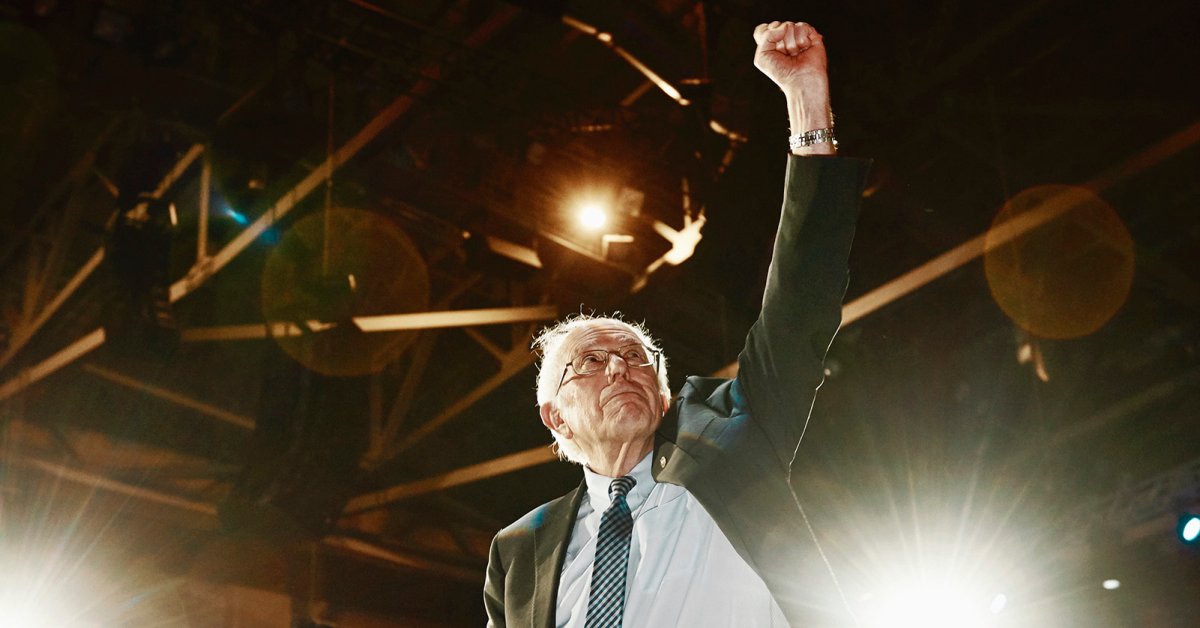 At first, the cheers for Bernie Sanders were so deafening he could hardly begin his speech. “This victory here is the beginning of the end for Donald Trump,” the Vermont Senator and newly minted Democratic presidential front-runner declared. “No matter who wins—and we certainly hope it’s going to be us—we are going to unite together and defeat the most dangerous president in the modern history of this country.”

With 85% of the vote counted late Tuesday, Sanders had won the New Hampshire primary with some 26% of the vote, beating second-place Pete Buttigieg, who took 24%. The state was long seen as a Sanders stronghold, but at fewer than 5,000 votes, the margin was unexpectedly slender. Minnesota Senator Amy Klobuchar was the surprise of the night, surging into a strong third place with 20% of the vote.

After a bungled Iowa result threw the primary contest into confusion, New Hampshire finally brought some clarity to a multi-way race that has partisans on the verge of panic. Buttigieg’s strong finish solidified his standing in the top tier, while Klobuchar’s surge established her as a potential contender. Massachusetts Senator Elizabeth Warren and former Vice President Joe Biden finished a distant fourth and fifth, each with less than 10% and unlikely to earn any delegates. While Warren and Biden vowed to fight on, their second straight poor showings will make it difficult to regain momentum going forward.

The night also brought the exit of two low-polling candidates, entrepreneur Andrew Yang and Senator Michael Bennet of Colorado. But while the field has shrunk somewhat, it remains jumbled heading into the next contests, the Feb. 22 Nevada caucuses and the South Carolina primary on Feb. 29. Buttigieg and Klobuchar remain little-known in those states, whose Democratic electorates are more diverse and working-class. And billionaire former New York Mayor Mike Bloomberg, while not competing there, is on the verge of qualifying for the next debate on Feb. 19.

Sanders’s success in the first two contests makes him the undeniable front runner, but he’s hardly on a glide path to the nomination. His slim plurality, just over a quarter of the vote, was a far cry from his overwhelming victory four years ago, when he and Hillary Clinton were the only two serious candidates. For Sanders’s fans, however, the victory was a vindication for a candidate once seen as having only niche appeal.

His passionate following has only grown more devoted. On Monday night, at the Whittemore Center Arena on the campus of the University of New Hampshire in Durham, more than 7,500 thronged to see an all-star cast of progressive celebrities on the eve of the primary. They booed when actress Cynthia Nixon mentioned Hillary Clinton—a signal of how deep the resentment toward the Democratic establishment runs. They put their hands in the air for former Ohio state senator Nina Turner—an indication of their devotion to the cause. They screamed for Rep. Alexandria Ocasio-Cortez’s exhortation to “choose to move forward” and cheered and stamped their feet for Sanders—an unmistakable sign of how fervent the desire for “political revolution” remains.

Sanders’ strategy has been to build a coalition of working class, minority and young voters—people who are often not a part of the political process. It won him the popular vote in Iowa, but Sanders admitted the low turnout there troubled him. New Hampshire was a second test of whether he could draw out the new voters he’s said he needs not only to win the nomination but for Democrats to beat Trump in November. Turnout surpassed 2016, but appeared on course to fall short of 2008 levels.

Sanders’s primary result was consistent with his polling in the week since the Iowa caucuses, while Buttigieg and Klobuchar outpaced theirs dramatically, suggesting a possible ceiling for Sanders even if he remains on top. Despite Sanders’s concerted effort to reach young people, turnout of first-time voters dropped slightly since 2016, according to NBC exit polls.

“I think he’s a little like Pat Buchanan,” said Debby Butler, a longtime activist and fundraiser in Concord who supported Klobuchar. The right-wing activist, she noted, won the New Hampshire Republican primary with 27% of the vote in 1996, but was unable to increase his support as the field narrowed. “This is probably the top for Sanders,” she predicted.

Buttigieg came into New Hampshire with the wind at his back. Fresh off a razor-thin delegate victory in Iowa, he barnstormed New Hampshire with an aggressive blitz of events and media interviews. He doubled down on his message of unity and belonging, touting his ability to appeal to what he called “future former Republicans” who might be sick of Trump’s GOP—a talking point given fresh credibility by the Iowa results. He routinely drew large crowds—nearly 1,000 in Londonderry and roughly 1,250 in Salem, both areas that have voted Republican in the last three presidential elections. His crowds were heavy on the kind of middle-aged suburban voters who tend to show up on election day, many newly aware of his candidacy.

The Buttigieg campaign is relying on such communities, working to attract voters who may be wary of Sanders’s calls for “revolution” and concerned about Biden’s age and uneven performances. Buttigieg has taken to accusing both of them of using the “arguments of the past,” and positions himself as the candidate who can transcend the bickering of 2016. Coming within just a couple points of Sanders will allow him to argue he’s the most viable of the moderate candidates going forward.

Voters in New Hampshire said they were impressed with Buttigieg’s tone, message and personality. “I like Pete’s style a little better than Bernie,” says Regina Lucas, a 50-year-old who works in a dental practice, as she dropped in on Buttigieg’s event in Keene on Saturday. “I liked his demeanor.” In his final swing through the state, Buttigieg campaigned with New Hampshire Rep. Annie Kuster, who compared his “excellent temperament” to “no drama Obama.”

But Klobuchar’s last-minute surge gives Buttigieg new competition in the moderate lane. In Iowa, her campaign manager Justin Buoen told a media roundtable sponsored by Bloomberg News that her strategy had “never been built on the need for a viral moment in order to carry us.” Instead, it was based on the principle that you “organize, organize and get hot at the end.“ In New Hampshire she did. Though she never came within double digits of first in a single pre-election poll, her forceful performance in the most recent debate, held near Manchester on Feb. 7, moved her up in the estimation of many rank-and-file partisans troubled by Biden’s floundering and Warren’s lack of traction. Previously many voters’ second choice, she suddenly made sense as a sort of Goldilocks candidate: neither too old nor too young, too left nor too right, too highbrow nor too populist.

“She’s nice, she seems to know what she’s talking about and she seems to represent the common person,” says Pat Murphy, a former president of the New Hampshire chapter of the National Organization for Women who attended Klobuchar’s election-night celebration in Concord. “Plus she’s not an old white man—that’s a definite plus. And she has experience.” Like many here, Murphy believes Sanders is too far left to win in November, while Warren strikes her as overly professorial, Buttigieg as too green and Biden as over the hill.

Warren’s fourth-place finish was a devastating blow for the Massachusetts Senator, who was counting on her deep organization and a neighboring media market to help her rebound from Iowa. She appeared to end up with less than 10% of the vote and not a single national delegate. Her campaign released a memo arguing that 98% of delegates remain up for grabs after New Hampshire and detailing a plan to continue accumulating delegates without necessarily racking up big wins.

From the stage Tuesday night, Warren warned Democrats that they could be heading for trouble if they allow the party to fracture the way it did four years ago. “The fight between factions in our party has taken a sharp turn in recent weeks, with ads mocking other candidates and with supporters of some candidates shouting curses about other Democratic candidates,” she said. “These harsh tactics might work if you’re willing to burn down the rest of the party in order to be the last man standing. They might work if you don’t worry about leaving our party and our politics worse off than how you found it. And they might work if you think only you have all the answers and only you are the solution to all our problems.”

Sen. Amy Klobuchar speaks at her Salem GOTV event at the Woodbury School in Salem, N.H. on Feb. 9, 2020.

As for Biden, the onetime frontrunner’s fortunes were so foul in the state that he jetted out of New Hampshire before polls closed Tuesday. He touched down in South Carolina, increasingly a make-or-break state for him. Aides remain bullish on the first Southern primary, where roughly two-thirds of the electorate is expected to be African American. Biden has large reservoirs of support with that bloc. The first two states, Biden’s allies argue, didn’t reflect the diverse Democratic Party because they are overwhelmingly white.

But it’s hard to avoid the feeling that Biden is flailing. He shook up his campaign after Iowa and campaigned aggressively in New Hampshire, turning up the volume as he attempted to convince voters of his passion and empathy. He swung hard at his rivals, calling out Sanders by name and releasing a slashing video against Buttigieg. Yet the campaign felt just as listless as before, something New Hampshire voters picked up on. The final Emerson College tracking poll before the vote found just 14% of New Hampshire Democrats expected Biden would be the nominee on Sunday, down from 39% a week earlier.

As for Sanders, his allies were jubilant. “Obviously at some point, we don’t know when, the race will start to consolidate,” said Sanders adviser Jeff Weaver. “And he is well poised to put together the kind of coalition that one needs to not only win the nomination but to win the general election as well.”

With reporting by Abby Vesoulis/Des Moines