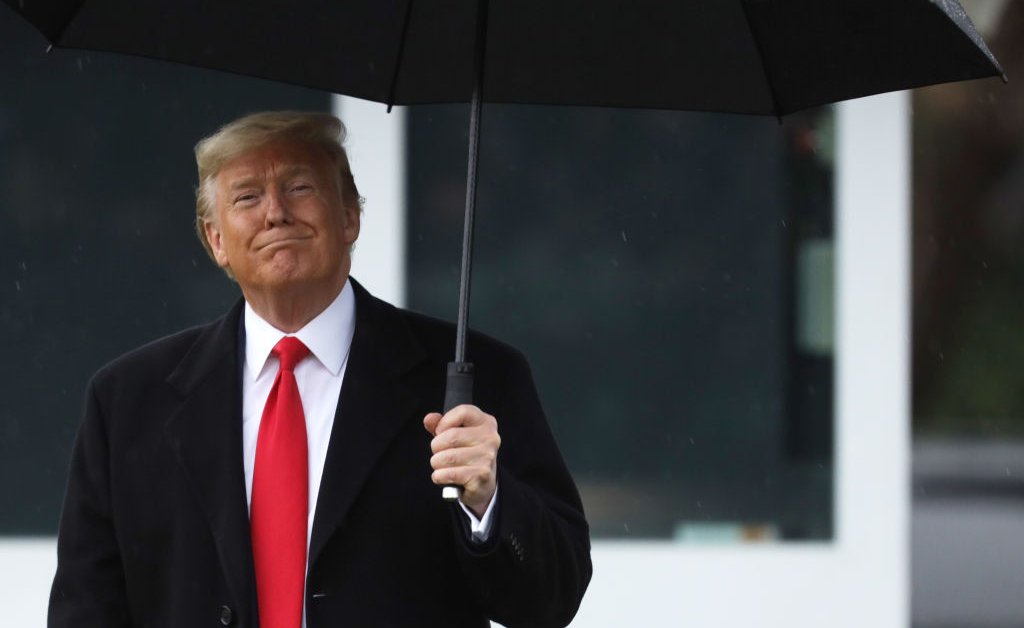 In recent days, President Trump’s mood in private White House meetings has veered between “ebullient” and “pissed.” He’s happy he’s survived the Senate impeachment trial and Robert Mueller investigation before that, but he’s “still pissed that he went through this for three years, that his kids went through this for three years,” a White House official says. “But he feels like he’s got the wind at his back.”

For a more conventional President, that might mean putting the spectacle of impeachment behind him and focusing on how to use the 11 months of his term to govern. But Trump has turned his mind to other matters: the Democrats’ fumbles in Iowa, his re-election campaign, and settling scores. “He’s getting some stuff off his chest,” the official says.

Trump has made no secret of the fact that he feels betrayed by White House officials who voiced their objections to his willingness to hold back military aid while asking Ukraine to investigate Joe Biden. And he has long believed the federal government — and the outer orbit of the White House in particular — is riddled with people who aren’t personally loyal to him. “DRAIN THE SWAMP!” Trump tweeted on Thursday, repeating a promise from his 2016 election campaign. “We want bad people out of our government!”

Trump has launched a season of getting even, lashing out at those who spoke out against him during the impeachment and Mueller investigations and openly demanding retribution. The spate of actions he’s taken in the last week alone underscores the fresh sense of empowerment he feels after the Senate cleared him of abusing the power of his office — and has critics worried he is dismantling the firewalls put up after President Richard Nixon’s abuses of power. The post-Watergate norms limiting executive power have evaporated, says William Cohen, the former Republican Senator from Maine and Secretary of Defense under President Bill Clinton, tells TIME. “There are no norms. Trump is basically corroding every institution in our system.”

Within 48 hours of being acquitted, Trump went on the offensive. On Feb. 7, Trump ordered Army Lt. Col. Alexander Vindman to be dismissed early from the National Security Council staff in a move that many saw as retaliation for Vindman’s testimony during his impeachment proceedings. That same day, Trump fired Gordon Sondland, the U.S. ambassador to the European Union and a former Trump campaign donor, who had told the House that “everybody knew” Trump was pressuring Ukraine to launch investigations. Senior intelligence officials were scheduled to brief Congress on Wednesday about security threats the country faces, but the Trump administration put the hearings on hold without a clear explanation.

When prosecutors recommended a seven-to-nine year prison sentence for his long-time friend and political advisor Roger Stone, Trump complained in a tweet, and senior officials at the Department of Justice intervened to shorten the sentence recommendation. Four prosecutors withdrew from the case and one if them resigned. Trump then publicly congratulated Attorney General Bill Barr on Twitter for “taking charge of the case” that was “totally out of control,” and punished the head of the office that prosecuted Stone by rescinding her nomination to a higher post at the Treasury Department.

Cohen, the former Republican senator and a lawyer, says Trump’s acquittal has led the President to believe he cannot be charged with a crime, or even investigated for misusing his office. The Senate’s acquittal of Trump was done out of “fear or complicity.” Even over the budget, Trump has been able to bend the Congress to his will, moving $3 billion to build a border wall that Congress had given to the Defense Department. The result is that the Republicans who control the Senate “basically have surrendered their power” to President Trump, says Cohen. “He is using his power as basically dictatorial powers because he believes the laws don’t apply to him,” he says.

There are indications that the pattern of Trump silencing dissent will continue. National Security Advisor Robert O’Brien is preparing to cull about one third of the National Security Council’s approximately 175 staff, a step that would remove dozens of career experts, like Vindman, on assignment at the White House from other agencies, according to a senior administration official. Trump’s close aides have long seen the ranks of bureaucrats as standing in the way of the President’s efforts. The move would bring the council staff “back to a manageable size,” O’Brien said Tuesday.

Trump has also publicly encouraged the Justice Department to punish former FBI officials who were involved in the Russia investigation. During a rambling statement in the Oval Office Wednesday, Trump brought up former FBI Director James Comey, former Deputy FBI Director Andrew McCabe, former FBI agent Peter Strozk and former FBI lawyer Lisa Page. “What’s happening with them? It was a whole setup, it was a disgrace for our country, and everyone knows it too, everyone,” Trump said.

Aides have warned Trump not to get involved in legal issues in front of the courts or reach into the Justice Department. But Trump has largely ignored that advice and insisted on venting his frustrations in public and openly pressuring Department of Justice officials to act on his concerns. Trump denied directly contacting the Department of Justice about Roger Stone’s case. “I didn’t speak to them, by the way, just so you understand,” he said in the Oval Office, during a visit by the President of Ecuador Lenín Moreno.

Trump’s White House has also delayed U.S. intelligence officials from publicly briefing Congress about threats the country faces. At the beginning of each year, the intelligence committees from both the House and the Senate traditionally convene panels of the country’s top national security officials, called “Worldwide Threat” hearings. This year, in a rare move, those have been indefinitely postponed. In recent years, the hearings have brought attention to the rift between the assessments of intelligence officials and Trump’s public statements. By not allowing senior officials to brief Congress, former Secretary of Defense Cohen says Trump is sending out the signal: “I don’t want to hear your views. I don’t want to know what you think. I want you to produce what I think.”

“All the pillars of stability that we thought preserve peace and stability for the past 70 years he’s just knocking them down one by one,” former Defense Secretary Cohen says. One thing that worries Cohen is what Trump has already done to erode checks on his ability as President to protect himself from scrutiny. “If he’s reelected, I think we will be hard pressed to say we live in a democracy where you have checks and balances and the rule of law because he doesn’t believe in the rule of law — he believes in the rule of one,” says Cohen.

Jury Convicts Harvey Weinstein on Some, But Not All, Charges

Toby Alderweireld shocked by reaction he received from school children on community visit, as Tottenham

Budding footballers far and wide have aspirations of becoming professionals themselves one day, with many viewing some of the biggest names in the game as their heroes. While Tottenham defender Toby Alderweireld appreciates those sentiments about himself, the Belgian insists he is not a ‘big star’. Getty Images – Getty Tottenham defender Toby Alderweireld is…

Can a Third Election in the Space of a Year Break Israel’s Political Deadlock?

Roddy Ricch Dunks, Races, And Dances In His Long-Awaited Video For ‘The Box’

Tony Romo to earn approximately $17 million per year in new deal with CBS, per reports

Tony Romo to earn approximately $17 million per year in new deal with CBS, per reports

Federal Reserve Will ‘Act as Appropriate to Support the Economy’