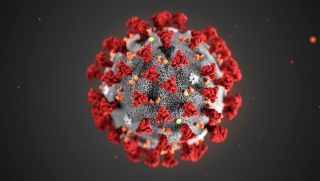 This illustration provided by the Centers for Disease Control and Prevention (CDC) in January 2020 shows the 2019 Novel Coronavirus.

The effects of the coronavirus outbreak are extending into the final frontier.

COVID-19, the disease caused by the novel coronavirus, has sickened more than 130,000 people worldwide to date, with more than 5,000 confirmed deaths. Both of those numbers are bound to rise considerably because we’re still in the early stages of the pandemic, health officials have stressed.

The economic impacts of COVID-19 are already significant, as anyone who keeps an eye on the stock market has surely noticed. Airline traffic is way down, major sports leagues such as the NBA have suspended or canceled their seasons, and many organizations are directing their employees to work from home.

Related: Live updates about the coronavirus and COVID-19

Count NASA in that latter group. Earlier this month, the space agency put its Ames Research Center in Silicon Valley on “mandatory telework status” until further notice, after an employee tested positive for COVID-19.

And the effect on the space community is much deeper and broader than that, from canceled or postponed conferences to delays in the collection of science data. Here’s a rundown of some of COVID-19’s more notable impacts on space science and exploration.

This week, the European Space Agency (ESA) and Russia’s federal space agency, known as Roscosmos, announced that the planned July launch of the life-hunting ExoMars rover had been pushed back to 2022. (Launch windows for Mars missions come just once every 26 months, when Earth and the Red Planet are properly aligned.)

The delay is chiefly attributable to problems with the mission’s parachute system, which has failed a series of key tests here on Earth. ESA officials also cited bugs in some key electronic equipment.

But travel restrictions designed to slow the spread of COVID-19 certainly haven’t helped, said ESA Director General Jan Wörner. He noted that a planned meeting to discuss the fate of the ExoMars 2020 mission with his Roscosmos counterpart, Dmitry Rogozin, had to be canceled recently.

Rogozin made this point a bit more explicitly, saying that the coronavirus situation played a role, albeit a secondary one, in the delay.

“It is driven primarily by the need to maximize the robustness of all ExoMars systems, as well as force majeure circumstances related to exacerbation of the epidemiological situation in Europe, which left our experts practically no possibility to proceed with travels to partner industries,” Rogozin said in a statement.

The coronavirus situation has also caused NASA to shift some of its scheduling.

For example, “three NASA Earth Science airborne science campaigns slated to deploy across the country this spring have rescheduled their field activity until later in the year,” NASA Administrator Jim Bridenstine said in a statement Monday (March 9).

“The campaigns are DeltaX, Dynamics and Chemistry of the Summer Stratosphere (DCOTTS), and Sub-Mesoscale Ocean Dynamics Experiment (S-MODE), which would include flights from Ames,” he added. “The scientific returns of these projects are not expected to be impacted by this change of plans.”

So far, Ames is the only NASA center with a mandatory work-from-home order. But the agency is taking steps to ensure that it’s ready to expand this decree if need be. For example, NASA conducted a telework day for many employees on March 6, in an attempt to get its plans and protocols in order.

And on Friday (March 13), NASA’s Goddard Space Flight Center in Greenbelt, Maryland, canceled all “non-mission-essential visits” to its various facilities.

“Goddard also is closing its visitor centers at Greenbelt and at Wallops Flight Facility, Virginia, beginning Friday, March 13, as a means to be protective and encourage social distancing,” NASA officials wrote in an update Friday.

Goddard remains open to staff, and none of its employees have tested positive for COVID-19 to date, officials added. People who can work from home are being encouraged to do so, however.

Conferences and other events

And then there are the conferences. A number of high-profile meetings and other events have been canceled or postponed because of COVID-19 concerns.

For example, the Space Foundation announced March 13 that it’s postponing the 36th Space Symposium, which was supposed to be held in Colorado Springs, Colorado, from March 30 through April 2. The Space Symposium is one of the space community’s signature annual events, bringing together thousands of people from around the globe, including some very heavy hitters. This year’s list of scheduled speakers included Bridenstine, U.S. Secretary of Commerce Wilbur Ross and Space Force Commander Gen. John Raymond.

Another prominent meeting, Satellite 2020 — which on Monday hosted SpaceX founder and CEO Elon Musk for a “keynote conversation” — ended one day earlier than planned, canceling all events that were scheduled to happen Thursday (March 12).

Satellite 2020 took place in Washington, D.C., and other events in and around the U.S. capital have also been affected. For instance, as SpaceNews reported, the American Astronautical Society postponed its annual Goddard Memorial Symposium in the Washington suburbs, which was supposed to be held March 17 through March 19.

The list goes on. The University of North Dakota’s Department of Space Studies, for example, is pushing its annual symposium from May to late August. The Northeast Astronomy Forum (NEAF), which usually attracts thousands of people to Rockland Community College in Suffern, New York, for a weekend each year, is going online because of COVID-19. “NEAF: The Virtual Experience” will take place April 4, conference organizers said, though they aim to hold the in-person event later this year.

Coronavirus also claimed one of the world’s biggest physics conferences: The American Physical Society canceled its March meeting, which was supposed to take place in Denver from March 2 to March 6.

The impact isn’t limited to the United States, of course. The European Southern Observatory has canceled public events at its headquarters in Garching, Germany, and has suspended public visits to La Silla and Paranal, two of its big observatories in Chile.

And, as SpaceNews noted, the United Nations Committee on the Peaceful Uses of Outer Space canceled a meeting of its legal subcommittee, which was scheduled to take place in Vienna from March 23 to April 3.

This is just a partial list, of course; the total tally of affected events is too long to detail here. But Space.com will continue updating this page, to let you know about the most important delays and cancellations.