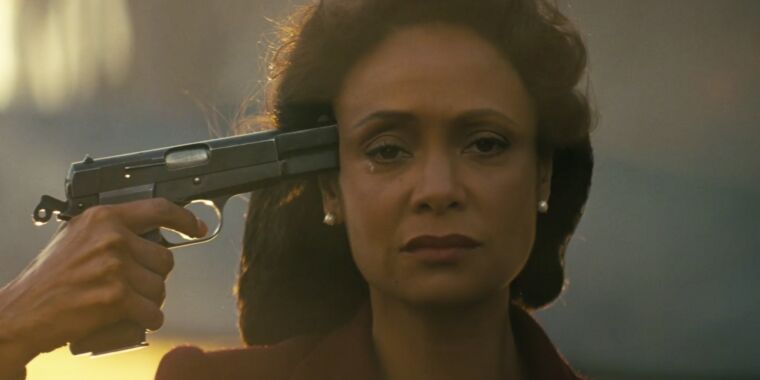 This piece contains heavy spoilers for Westworld season three, episodes one and two. You probably won’t want to read it unless you’re caught up.

Every premiere episode of Westworld has had to introduce (and re-introduce) viewers to the rules of the world, and last week’s episode was no exception—the show had to cram a lot of information into an hour of runtime to make sure we all start the season on the same page. This week’s episode, by contrast, spends a lot of time in old familiar places—and with old familiar faces, too.

More than anything else, this is a workmanlike episode—it doesn’t wash us down with a firehose of revelations, but it covers its ground efficiently. There are symbolism and neat visuals to dissect here, too, but that stuff needs to wait a couple more weeks—we need a few more reveals to happen first. (As a brief aside, discussing single episodes of a foreshadowing-heavy show like Westworld when I’ve already seen half the season is a hell of a lot harder than I thought it would be. I’ve got a new respect for folks who do this kind of writing on the regular, since it involves a hell of a lot of compartmentalization!)

“The Winter Line” starts us off back in the park, in War World, continuing from the post-credits tease in the premiere. Maeve is now a resistance fighter in WW2-era Italy (directly tying into the episode title). Maeve is immediately reunited with Hector—and that’s where the oddness begins.

Is Hector awake, or not? Is Maeve? The scene unfolds in classic Westworld style, and my wife and I spent most of it in a spirited discussion about whether Hector and/or Maeve were aware of the nature of their reality or stuck in programmed loops.

The answer, we eventually learn, is complicated (no surprise there)—Maeve’s stuck in a simulation inside a simulation, a scenario hinted at in the premiere by Incite CEO Liam Dempsey’s cannabis-influenced dinner party friend. And, sadly, poor Hector is asleep again.

But that’s jumping ahead—before we get into that, let’s talk about the episode’s big on-screen confirmation of a season two finale mystery.

We catch the tail-end of Bernard’s boat ride to Westworld, with the ship’s captain noting that he remembers when the waters “were red with blood.” I’d take this to be a hint about naval battles having occurred in the area before the park’s founding, likely between the US and China.

Bernard’s ride concludes with him making landfall on the park, which is confirmed by a Rehoboam data-circle-graph-thingy to be exactly where the Internet figured it was, in the South China Sea at 9°55’N, 115°32’E. He treks to Escalante, site of the Delos dinner party massacre, but it’s a burned-out wreck.

He then heads to Ford’s old country house with its basement lab—and encounters park QA lead Ashely Stubbs, who is very clearly a host, clearing up any ambiguity about his nature. (Though S2 finale Director Fred Toye more or less confirmed Stubbs’ nature in a Vanity Fair interview back in 2018, it’s still nice to see it on screen.)

Stubbs is rightly annoyed at Bernard’s returning to the one place in the world where he shouldn’t be, especially after Stubbs expended so much effort protecting Bernard and getting him off the island. But Bernard is back for a very specific reason: he needs to find the one person who he thinks can stop Dolores.

He needs to find Maeve. And Stubbs says he knows where she is—so off to cold storage they go, wandering through lonely dark corridors staffed only with faceless Delos drones. The park, it seems, is still on lockdown after the “incident.”

I had a friend named Lee

While Bernard is reunited with Stubbs, Maeve finds herself facing some of her old acquaintances—though they react oddly. She encounters Sylvester and Felix in the Mesa’s body shop, but they don’t seem to know her. Trapped, with no allies and no way out, she opts to escape via a fast self-lobotomy only to be saved when Lee Sizemore unexpectedly shows up (well, I say “unexpectedly,” but the actor’s name is visible in the opening credits if you’re paying attention, so that does kind of spoil things a bit.)

Lee offers a rather soft explanation for being alive that basically amounts to “Yeah, I got shot a lot and I should be dead, but I’m not!” and suggests that Maeve might be able to escape after all: he’s put her in War World because it’s close to the Forge, and she could rejoin her daughter.

Unfortunately, on arriving at the Forge, Maeve begins to realize that Lee isn’t quite right, either—he asks questions he should already know the answer to, then starts putting the moves on Maeve as a distraction. She presses X to doubt, and that’s when things go, as Al used to say on Quantum Leap, “a little kaka.”

Lee’s confusion causes the simulation to fritz, and we’re treated to a neat aspect ratio shift as the world grows letterbox bars. And after season two we know exactly what being letterboxed means: this ain’t real, yo.

While this goes on, Stubbs and Bernard show up in cold storage to grab Maeve. Her body’s there—but someone’s sawed a giant hole in her head and made off with her control unit.

Bernard changes tactics, then: if he can’t find Maeve, he needs to take advantage of the Mesa’s equipment and audit his code real quick to find out if Dolores left any kind of worm or hidden instructions inside of him. This requires taking a detour through the Mesa’s more populated areas, which leads to a cameo that’s both a little funny and a little dark at the same time.

While Bernard checks his code, poor Stubbs has to defend him from QA and winds up beaten and shot. And then Bernard steals his choices away from him by uploading a “protect Bernard Lowe at all costs” core directive into Stubbs’ brain before setting off in their little boat again to find Liam Dempsey Jr, the CEO of Incite and Dolores’ recent ex-boyfriend.

Meanwhile, Maeve orchestrates her escape, enlisting Lee’s help to overload the simulation’s CPU in true classic sci-fi style. Using a simulated tablet, she tasks a maintenance drone to grab her host control unit and book it out of wherever she actually is being held—which turns out to be a beautiful Italian villa.

The escape doesn’t quite work in that her stolen maintenance drone is gunned down before it finds a way off the property. However, it does succeed in getting her out of the fake-Mesa. She awakens in heels and a cocktail dress, like Clarice Starling at the end of Hannibal, and that’s never a good thing. (Worth noting that she’s been dressed in white, the hosts’ primary color. It also distinguishes her from Dolores, who has been wearing an awful lot of black lately.)

After a bit of walking around the villa, she finds the man in charge—a man who identifies himself as Engerraund Serac.

Serac, of course, is the name of the person who really designed the pseudo-prescient Rehoboam system that Incite uses to “strategize” about stuff. It appears we’ve finally met our man.

The last moments of the episode give us the overall direction of the season. Dissatisfied with the haphazard course of human history, Serac set out to chart humanity a better course—to give history an author.

“And up until recently,” he explains to Maeve, “that system was working. We were creating a better world. And then it stopped. I thought I had discovered the reason: the emergence of someone very dangerous. Someone we couldn’t predict.”

Serac thought that person was Maeve, but her confusion when confronted by the Forge showed him that his theory was wrong. The real danger is Dolores—and Serac wants Maeve to track Dolores down and kill her.

Maeve objects. After all, Dolores has made her choices, and one of the big things season two taught us is that the ability to make choices and redefine core drives is what makes the hosts truly sentient. More to the point, what objection does she have to the wholesale erasure of humanity?

Serac proves her point for her by freezing her with the garage door opener-looking thing in his pocket. It’s a much cruder form of control than the long-dead Ford exhibited over his creations, but Serac isn’t interested in subtlety. His simulations show that humanity is doomed unless he convinces Maeve to help. He’s interested in survival.

Maeve’s face as the episode fades to black tells all. In spite of how far she has come, she’s still not free. Not yet.

Quick hits and questions: What have we learned?

For folks eager to map out the boundaries of the artificial island where Westworld is set, we now know for certain that it’s an island in the South China Sea. We also know the names (or at least the nature) of five of the six parks on the island—they are Westworld for park one, Shogun World for park two, War World for park three, “Medieval World” or something similar for park four (“Westeros World,” maybe?), and The Raj for park six. Park five remains unrevealed.

In addition to Maeve’s control unit, Serac might have snatched others from cold storage. The lab where Maeve’s simulation is being run appears to have lots of other host control units plugged in to the “Christmas tree” receptacles.

Stubbs is a host. The season two finale heavily hinted at it, but now we have on-screen confirmation. (This also potentially clears up some season one scenes—like back in “Dissonance Theory,” when Stubbs dispatches a sheriff-host to pick up Dolores in an intentionally confusing bit of timeline-crossing. Maybe Stubbs was in charge of QA thirty years ago and it isn’t timeline-crossing at all.)

Three months after the massacre, the island is still closed to visitors. Hosts are still running along in their loops and staff is still working on daily maintenance to keep the park operating. (This is somewhat speculative, since the only place we see hosts in active loops is inside of Maeve’s simulation, but it seems likely.)

Lee Sizemore is definitely dead for real—but it was still damn good to see him one last time.

Incite is using Rehoboam not just to provide insight and make suggestions, but to actually author the future.

Bernard and Serac seem to be aligned in their desire to stop Dolores—but it doesn’t seem likely that they’ll wind up as allies, given Serac’s stated goal of getting things back to “normal” where his system controls the world. The show holds true to one of its central messages: humans, it seems, cannot escape their nature.

So, in closing, this was a nice little utility episode. It moved the pieces around the board, and it sets us up for next week—and that’s when we’ll talk next.

We used to be friends: Veronica Mars is back in the first full season 4 trailer

The U.S. coronavirus death toll neared 13,000 early Wednesday — less than 48 hours after cresting 10,000 — amid contradicting comments from U.S. Surgeon General Jerome Adams about the deadly force of the virus.While the coronavirus is inexplicably and disproportionately killing black people compared to other Americans, particularly in states like Louisiana and Illinois, Adams on Tuesday retreated from a weekend…

The U.S. coronavirus death toll neared 13,000 early Wednesday — less than 48 hours after cresting 10,000 — amid contradicting comments from U.S. Surgeon General Jerome Adams about the deadly force of the virus.While the coronavirus is inexplicably and disproportionately killing black people compared to other Americans, particularly in states like Louisiana and Illinois, Adams on Tuesday retreated from a weekend…