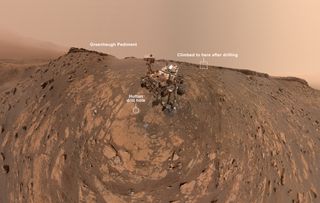 NASA’s Curiosity Mars rover took this selfie on Feb. 26, 2020. The crumbling rock layer at the top of the image is the Greenheugh Pediment, which Curiosity crested on March 6.

NASA’s Mars rover Curiosity just climbed its steepest Red Planet slope to date, after snapping a nice selfie that gives us a better appreciation of the achievement.

Curiosity crested a promontory called the Greenheugh Pediment on March 6, showing considerable perseverance in the process. (Perseverance, by the way, is the name of NASA’s next Mars rover, a life-hunting robot that’s scheduled to launch this July.)

“It took three drives to scale the hill, the second of which tilted the rover 31 degrees — the most the rover has ever tilted on Mars and just shy of the now-inactive Opportunity rover’s 32-degree tilt record, set in 2016,” NASA officials said in a statement Friday (March 20).

Opportunity holds several other records as well, including the greatest distance traveled on the surface of a world beyond Earth (28.06 miles, or 45.16 kilometers) and the longest-lived Mars rover. (“Oppy” landed a few weeks after its twin, Spirit, in January 2004 and was declared dead in February 2019, though it last communicated with Earth in June 2018, just before a huge dust storm engulfed the rover.)

Curiosity stopped to take some pictures on Feb. 26, shortly before concluding the historic climb. Mission team members stitched together 86 of these photos to make a mosaic selfie, which gives the lay of the Martian land and also shows a drill hole Curiosity made to sample and study some rock.

The Greenheugh Pediment is on the slopes of Mount Sharp, the 3.4-mile-high (5.5 km) mountain that Curiosity has been climbing since September 2014. The rover’s handlers carefully plan out each drive to ensure that Curiosity stays safe.

“The rover is never in danger of tilting so much that it would flip over — Curiosity’s rocker-bogie wheel system enables it to tilt up to 45 degrees safely — but the steep drives do cause the wheels to spin in place,” NASA officials said in the same statement.

Curiosity landed inside Mars’ 96-mile-wide (154 km) Gale Crater in August 2012, on a $2.5 billion mission to determine if the area could ever have supported microbial life. The car-size robot quickly determined that Gale supported a potentially habitable lake-and-stream system in the ancient past and that this environment persisted for long stretches — perhaps millions of years at a time.

Curiosity is still going strong, reading Mount Sharp’s rock layers for clues about how, why and when Mars transitioned from a relatively warm and wet world long ago to the cold, dry planet it is today.

Why some people celebrate Christmas in January

Why Abby Lee Miller Is Apologizing to Dance Moms Stars

YouTube Abby Lee Miller is vowing to do better.Earlier this week, two parents and a producer from Dance Moms shared their experiences of working with the Abby Lee Dance Company founder.In fact, Adriana Smith took to Instagram and claimed the reality star made controversial remarks towards her daughter Kamryn Smith when she was seven years…