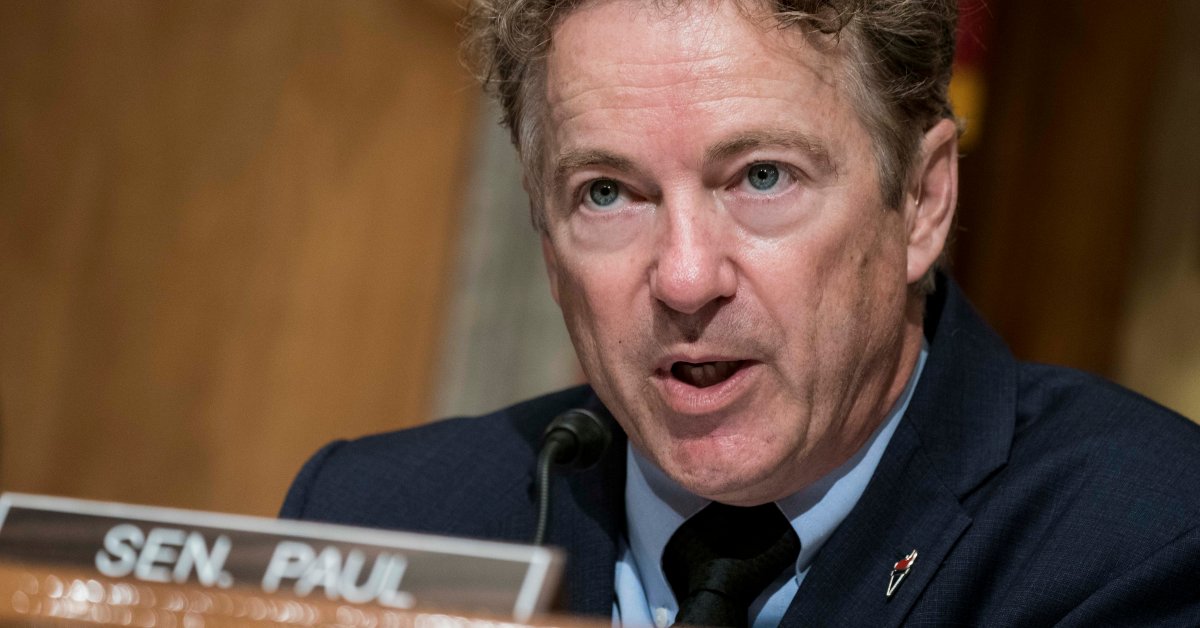 (WASHINGTON) — Kentucky Sen. Rand Paul was tested a week ago for the novel coronavirus, but continued working at the Capitol because he “felt that it was highly unlikely” he was sick since had no symptoms of the illness, he said Monday. Paul also said he did not have direct contact with anyone who tested positive for the virus or was sick.

Paul announced Sunday that he had tested positive for the virus, becoming the first case of COVID-19 in the Senate and raising fears about further transmission of the virus among senators, including some who are in their 70’s and 80’s.

“Since nearly every member of the U.S. Senate travels by plane across the country multiple times per week and attends lots of large gatherings, I believed my risk factor for exposure to the virus to be similar to that of my colleagues, especially since multiple congressional staffers on the Hill had already tested positive weeks ago,” Paul said in a statement Monday.

“For those who want to criticize me for lack of quarantine, realize that if the rules on testing had been followed to a tee, I would never have been tested and would still be walking around the halls of the Capitol,” Paul added. Current federal guidelines would not have called for him to get tested or quarantined, Paul said.

“It was my extra precaution, out of concern for my damaged lung, that led me to get tested,” he said.

Read more: Why It’s So Hard to Get Coronavirus Testing in the U.S. Right Now

Paul, 57, had surgery last year to remove part of a lung damaged in a 2017 assault by a neighbor who attacked him over a long-standing landscaping dispute. Paul broke several ribs in the incident and was later awarded $580,000 in damages and medical expenses.

“Perhaps it is too much to ask that we simply have compassion for our fellow Americans who are sick or fearful of becoming so.” he said in the statement released by his office. “Thousands of people want testing. Many … are sick with flu symptoms and are being denied testing. This makes no sense.”

Paul, an eye surgeon, went into quarantine Sunday after learning his results.

His announcement led Utah’s two GOP senators — Mike Lee and Mitt Romney — to place themselves into quarantine, stepping away from negotiations as the Senate worked on a $1.4 trillion economic rescue package for the coronavirus crisis. At least five senators, including Paul, are in self-quarantine.

Paul was on Capitol Hill this past week, including at a luncheon Friday among GOP senators. He spoke on the Senate floor on Wednesday afternoon, addressing the cornonavirus and a failed amendment he sponsored that would have paid for virus relief efforts by withdrawing U.S. forces from Afghanistan.

A spokesman for Sen. Jerry Moran, R-Kan., said Moran briefly saw Paul at the Senate gym Sunday morning and that he shared that information with GOP colleagues at a policy meeting. Moran “followed CDC guidelines and kept a safe distance between him and Sen. Paul,″ spokesman Tom Brandt said. Moran has spoken with the attending physician at the Capitol and has been told he does not need to self-quarantine, Brandt said.

Sen. Kyrsten Sinema, a Democrat from Arizona, chastised Paul on Twitter, saying his decision to return to the Capitol after he was tested — but before he learned the results — was “absolutely irresponsible.″

Read more: Why Overreacting to the Threat of the Coronavirus May Be Rational

“You cannot be near other people while waiting for coronavirus test results. It endangers others & likely increases the spread of the virus,″ Sinema said Sunday.

Other senators, including Republicans Ted Cruz of Texas and Lindsey Graham of South Carolina, had gone into self-quarantine while they awaited the results of a coronavirus test. Both were negative.

A day after Paul’s announcement, calls grew among senators for remote voting. Graham, chairman of the Senate Judiciary Committee, tweeted that “I totally support” the idea and said the change should be made before the Senate leaves town. First-term Sen. Kevin Cramer, R-N.D., tweeted that “extraordinary times call for extraordinary measures. It is time to bring the Senate into the 21st century.”

Sens. Rob Portman of Ohio and Dick Durbin of Illinois have put forward a bipartisan resolution to amend Senate rules to allow senators to vote remotely during a national crisis.

“At some point (remote voting) is going to become inevitable,” said Sen. Amy Klobuchar, D-Minn., who announced Monday that her husband has coronavirus.

The Coronavirus Brief. Everything you need to know about the global spread of COVID-19

Bill Withers, Writer and Singer of ‘Lean On Me,’ Dies at 81