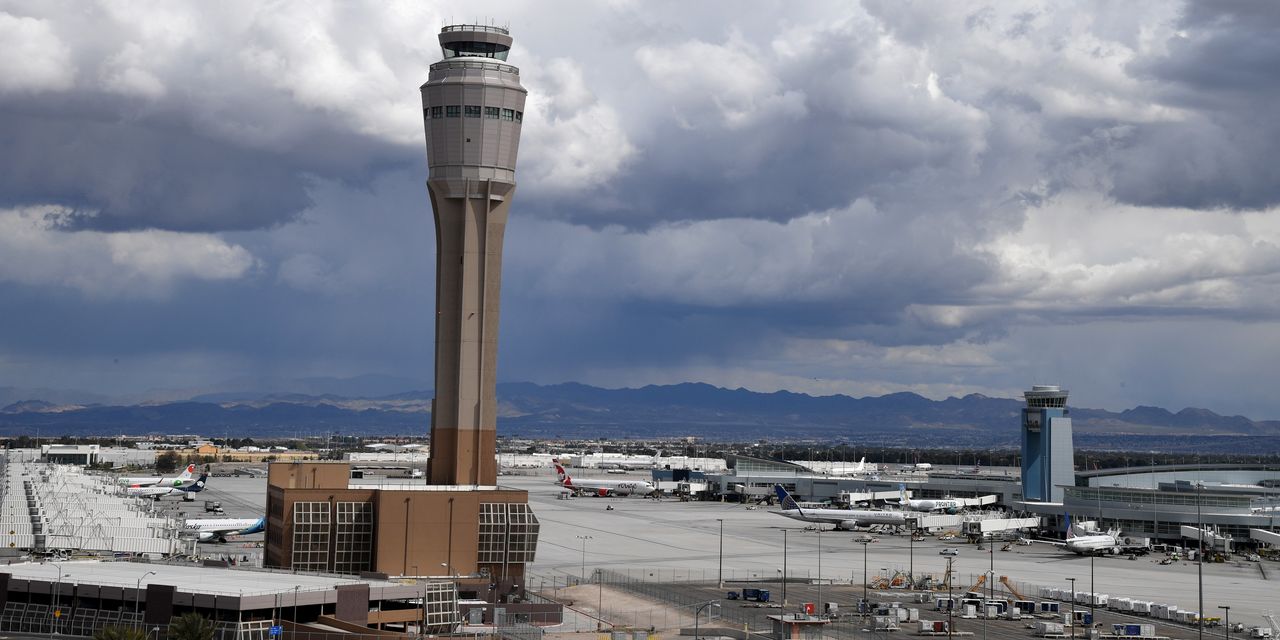 Major U.S. airlines are drafting plans for a potential voluntary shutdown of virtually all passenger flights across the U.S., according to industry and federal officials, as government agencies also consider ordering such a move and the nation’s air-traffic control system continues to be ravaged by the coronavirus contagion.

No final decisions have been made by the carriers or the White House, these officials said. As airlines struggle to keep aircraft flying with minimal passengers, various options are under consideration, these people said.

U.S. airlines have already eliminated the vast majority of international flying and have announced plans to cut back domestic flying by as much as 40%. Travelers are staying home at even greater rates. The Transportation Security Administration reported that passenger flow at its checkpoints was down more than 80% Sunday from the same day a year earlier.

On Monday, thousands of  flights were canceled, in some cases because planes weren’t full enough to justify the trip, with passengers numbering in the single digits. Some planes that did take off have been emptier than ever before. For example, a flight between New York’s LaGuardia Airport and Washington DC had just three passengers. U.S. airlines including

Inc. canceled over 40% of scheduled flights Monday, according to Flightaware.com, a flight tracking site. Some airline officials expect planes to be even emptier as the week goes on.

Airlines are preparing for the possibility that contagion-driven staffing emergencies at air-traffic control facilities could force the issue, making it impossible to continue operating in parts of the country.

President Trump and his advisers have been reluctant to mandate a cessation of commercial flights nationwide, some of these officials said, partly because passenger jets also carry a large portion of U.S. mail and essential cargo shipments. Over the weekend, Dr. Anthony Fauci, a member of the White House’s virus task force, told CNN, “There’s no plan today, or tomorrow to seriously consider” mandating an end to domestic passenger air travel.

During a televised press conference Monday, Mr. Trump said he was leaning toward lifting nationwide guidance for “social distancing” perhaps by the end of the month in an effort to salvage the economy. If that occurs, even in limited parts of the country, the government could be less inclined to call for a broad air-travel shutdown.

Airlines generally favor government orders rather than voluntary industry initiatives, partly because a mandate would provide airlines with extra ammunition in their ongoing lobbying for federal aid. “They would definitely prefer the government did it,” according to one industry official familiar with the deliberations. In addition, a voluntary shutdown could run afoul of some existing labor contracts that stipulate minimum levels of flights, according to other government and industry officials.

Even if a decision comes quickly, officials said, it is likely to take several days to implement to ensure an orderly process of pulling aircraft out of service, adding them to those carriers already have parked and giving crews adequate time to make their way back home.

But in the past few days, according to some of these officials, the prospect of an eventual halt has increased for various reasons.

One important factor is that Federal Aviation Administration officials fear that additional positive tests for Covid-19, the disease caused by the novel coronavirus, among agency controllers and technicians who maintain their equipment could unravel the nation’s air-traffic control system. Nearly a dozen traffic-control facilities from New York to Chicago to Las Vegas have been temporarily closed to disinfect and clean them, with many more employees at home on self-quarantine while others are being investigated for potential contacts with infected workers.

So far, longstanding FAA contingency plans have managed to deal with the closures by imposing temporary flight restrictions, rerouting planes and shifting responsibilities among backup facilities and employees. Inside the agency, though, concern is growing that new employee infections, especially at key locations, could upend existing contingency options. In some cases, replacing controllers removed from their radar screens would be extremely difficult because it typically takes months of training to get them up to speed to do specific jobs.

Another option to keep cargo shipments flowing would be a White House decision to call up portions of what is called the Civil Reserve Air Fleet, essentially commercial jets designated to help the Pentagon with logistics and other needs during national emergencies. Once activated by the White House or the Pentagon, those planes could help carry general cargo, military medical staff, medical equipment or other supplies.

The CRAF fleet, intended to augment the military’s traditional airlift capacity, includes some 400 planes from about two dozen carriers. The Pentagon and White House didn’t immediately respond to requests for comment.

A safety bulletin issued Monday by the International Federation of Air Line Pilots Associations, the umbrella labor group for commercial aviators, illustrates the challenges of maintaining even today’s reduced level of passenger trips. Among other things, the nonbinding guidance urges airlines to devise crew schedules that keep teams of pilots together, thereby reducing potential infections of other pilots. Normally, pilots are paired on a more short-term basis as they fly schedules over weeks or months.

Write to Andy Pasztor at andy.pasztor@wsj.com and Alison Sider at alison.sider@wsj.com