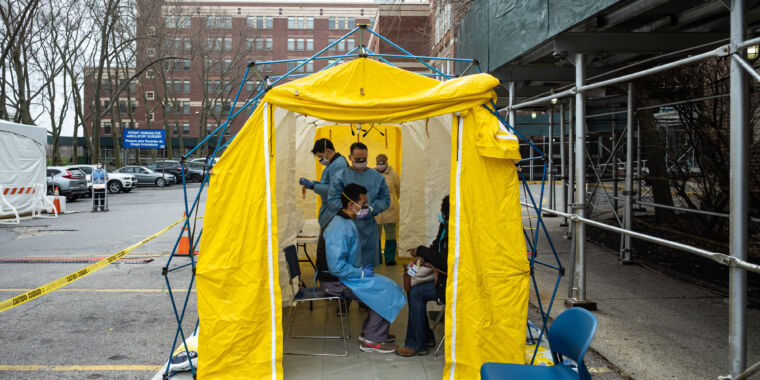 The new coronavirus doesn’t just kill by storming lungs and other organs. It also kills by besieging health care systems.

If left to swirl in a community unchecked for a few weeks, the virus can whip up a tsunami of cases that crash into urgent care clinics, emergency departments, and intensive care units, quickly washing out beds, supplies, and staff.

In such a crisis, doctors must make heart-wrenching decisions about which patients get the last beds and which get scarce ventilators and respiratory therapists. At the same time, they’re likely facing shortages of personal protective equipment (PPE), such as masks and gowns. Rationing and reusing such items leads to more nurses and doctors getting sick. That means fewer health care workers to wade through the flood of patients. Some may even join their patients in needing critical care.

Meanwhile, the normal stream of patients needing emergency care for accidents, heart attacks, strokes, and other conditions may be lost in the deluge.

Just a few months ago, this scenario may have seemed unthinkable in countries with modern health care systems. But it has been a consistent feature of the COVID-19 pandemic so far. Reports include patients going from hospital to hospital to try to get treatment in Wuhan, China—where the outbreak began—to instances of patients in South Korea dying at home while waiting for a bed to open up in a hospital.

In hard-hit Italy, doctors report having to ration care and make difficult decisions about who among the critically ill to intubate. In Spain, patients are dying in waiting rooms.

In New York City, which has detected more than 21,800 cases and 281 deaths, doctors are already sounding the alarm of an overwhelming surge in cases. One doctor at a hospital in Queens described the situation as “apocalyptic.” The report noted that a refrigerator truck had been stationed outside the hospital to hold the bodies of the dead.

According to a briefing from the Federal Emergency Management Agency and obtained by The New York Times, the city’s 1,800 intensive care beds will be full by March 27.

This could happen anywhere. In a recent article in The New England Journal of Medicine, a group of medical ethicists and public health researchers made a series of conservative estimates, starting with the estimate that about 5 percent of the US population—about 16 million—will become infected with SARS-CoV-2 within the next three months. From there, about 8 percent of those cases may need to be hospitalized. That’s 1.28 million hospital beds. Of those, 960,000 may need to be admitted to an ICU.

According to the American Hospital Association, there are just under 800,000 staffed beds in community hospitals. Estimates of the country’s ICU beds for adult patients range from just 68,000 to 85,000.

Ultimately, how the pandemic plays out in the United States generally and in specific areas is difficult to predict. Social distancing and other interventions could lessen the blow.

But, given the rapidly rising case counts in some place, it is likely that at least some US doctors will soon face difficult choices, much like their counterparts abroad. Some of those choices will be “extremely psychologically traumatic,” the NEJM article authors write.

“The choice to set limits on access to treatment is not a discretionary decision, but a necessary response to the overwhelming effects of a pandemic,” they write. “The question is not whether to set priorities, but how to do so ethically and consistently, rather than basing decisions on individual institutions’ approaches or a clinician’s intuition in the heat of the moment.”

So, in an overwhelming pandemic, how should doctors decide whom to save?

Their first recommendation for how to ethically allocate care in the COVID-19 pandemic is to prioritize saving the most lives and more years of life. That is, prioritizing people who are sick but likely to recover over those who are unlikely to recover with treatment or don’t need treatment to recover. Because many of the severely ill patients who are most likely to recover are young, this also has the effect of “giving priority to those who are worst off in the sense of being at risk of dying young and not having a full life.”

Because maximizing benefits this way is seen as paramount, the researchers even note that it may be ethically justified for doctors to remove some patients from ventilators or ICU beds if other severely ill patient arrive with better chances of surviving.

If doctors are faced with many similar patients with similar prognoses, the researchers’ third recommendation is that things like beds and ventilators should be allocated randomly, such as in a lottery. This is more ethical than allocating resources in a first-come, first-serve way, they argue. The latter approach may benefit those who simply live closer to health care facilities, may encourage crowding in a time when social distancing is important, and may penalize those who get sick later in the pandemic, possibly because they were trying to adhere to public health measures, such as social distancing.

In their fourth recommendation, the researchers say that priorities for some resources should differ from others and follow the latest scientific evidence. For instance, the best way to maximize lives and life years is to prioritize some young patients over elderly ones when allocating ICU beds and ventilators. Conversely, it may be justified to prioritize vaccines for elderly over the young. This could maximize saving lives because the elderly tend to have higher rates of death from COVID-19. However, if data indicates that immunizing youth first would be the most effective way to reduce spread of the disease, that prioritization may be reversed.

Those who agree to take on the risks of participating in trials of experimental vaccines or treatments should also receive some priority in treatment, the researchers say in their fifth recommendation. But, such research participation should only be used as a tiebreaker among similar patients.

Lastly, the researchers suggest that these recommendations apply equally among COVID-19 patients and all other types of patients. They give the example that if a doctor suffers a life-threatening allergic reaction and needs a ventilator, the doctor should be given priority over COVID-19 patients who are not health care workers.

Of course, with the multitude of scenarios that may arise in the next few months, these guidelines will not provide clear answers in every instance. But what is clear, the researchers say, is “a need for fair and consistent allocation procedures.” And “these procedures must be transparent to ensure public trust in their fairness.” They note that reports of celebrities and the wealthy apparently receiving priority in testing has already eroded trust.

The researchers recommend that individual health care institutions have committees or appointed officials to help craft and apply their own guidelines—shaped by the above recommendations. Hopefully, hospitals won’t need to use them. But if they do, it will both help keep overburdened doctors from making traumatic decisions on their own and help ensure equal treatment of patients.

Half a century after Apollo, why haven’t we been back to the Moon?

The OnePlus 8 series will be the first with wireless charging, and it’s super fast