Arctic Ocean will be ice-free in the summer before 2050 even if emission-cutting goals are met, shock study reveals

By Ian Randall For Mailonline

The sea around the North Pole will be ice-free in the summer before 2050 — even if emission-cutting goals are met, a shocking study has revealed.

Experts modelled the impact of various levels of carbon dioxide emissions on Arctic sea ice, finding that the targets of the Paris Climate agreement will not be enough.

Sea ice in the Arctic normally grows and shrinks according to the seasons, but at present some ice — which is home to animals like polar bears — always remains.

However, the team behind the findings said that we can still have control over how often the Arctic thaws and for how long in future — but only if emissions are slashed.

Scroll down for video

The Arctic Ocean will be ice-free in the summer before 2050 — even if emission-cutting goals are met, a shocking study has revealed. Pictured, the Arctic ice is home to polar bears 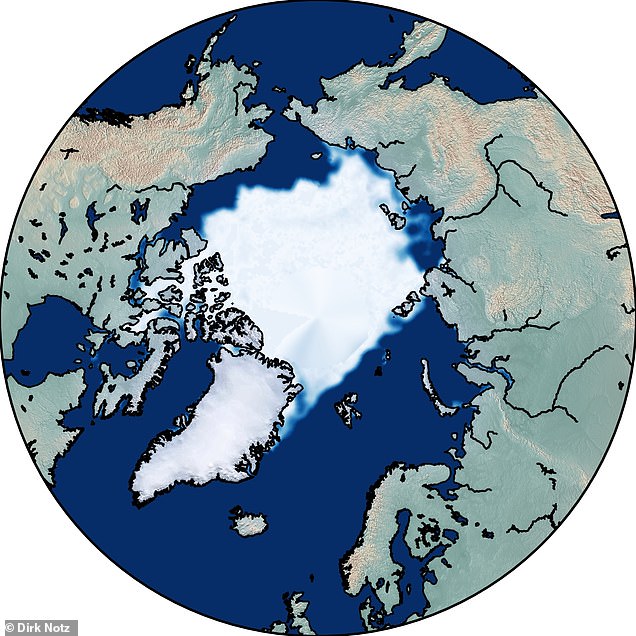 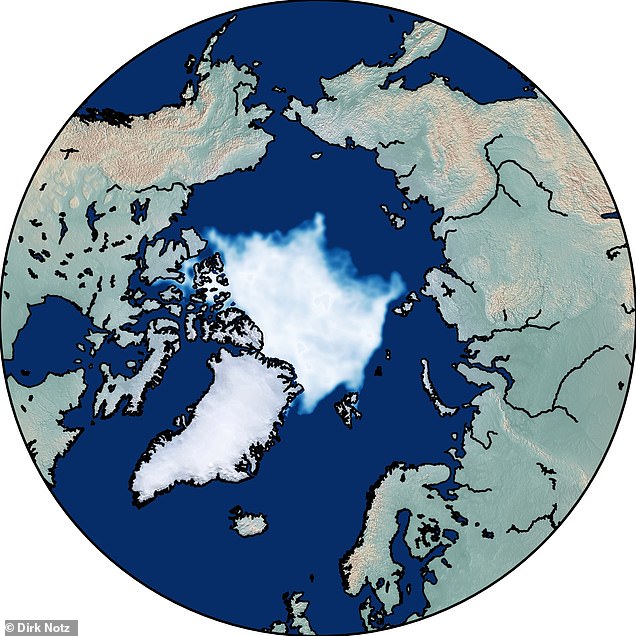 Experts modelled the impact of various levels of carbon dioxide emissions on Arctic sea ice, finding that the targets of the Paris Climate agreement will not be enough. Pictured, the difference between the extent of Arctic sea ice at the end of the summer in September 1979 (left) and in September 2019 (right)

The climate-modelling study was conducted by climate scientist Dirk Notz of the University of Hamburg in Germany and colleagues.

‘This really surprised us,’ he added.

Currently, the North Pole is covered by sea ice all-year-round — but, each summer, the area of the sea  that the ice covers decreases before growing again in winter.

As a result of the warming effect of greenhouse gases like carbon dioxide and methane, areas of the Arctic Ocean once constantly covered with ice have begun to thaw out during the summer months.

In the future — if humanity succeeds in reducing its emission levels rapidly — completely ice-free years in the Arctic are predicted to occur only occasionally.

However, with higher emissions, the Arctic Ocean will become ice-free in the summers of most years.

Sea ice in the Arctic normally grows and shrinks across the seasons, but at present some ice — which is home to animals like polar bears — always remains. Pictured, researchers conduct analyses out on the Arctic sea ice, which may completely vanish in the summer before 2050

Not only will the additional melting contribute to rising sea levels, but it will also mean the loss of precious hunting grounds and habitats for polar bears and seals.

In their study, the researchers used the most up-to-date climate models to predict the effects of different carbon dioxide levels on the state of Arctic sea ice.

These are the same models used by the Intergovernmental Panel on Climate Change, the environmental research branch of the United Nations.

The full findings of the study were published in the journal Geophysical Research Letters.

WHAT ARE THE EFFECTS OF LOWER SEA ICE LEVELS?

The amount of Arctic sea ice peaks around March as winter comes to a close.

NASA recently announced that the maximum amount of sea ice this year was low, following three other record-low measurements taken in 2015, 2016 and 2017.

This can lead to a number of negative effects that impact climate, weather patterns, plant and animal life and indigenous human communities.

The amount of sea ice in the Arctic is declining, and this has dangerous consequences, NASA says

NASA researcher Claire Parkinson said: ‘The Arctic sea ice cover continues to be in a decreasing trend and this is connected to the ongoing warming of the Arctic.

Watch what SpaceX’s first-ever astronaut launch will look like