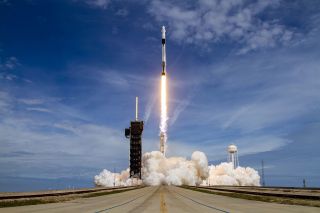 A SpaceX Falcon 9 rocket launches from NASA’s Kennedy Space Center for an uncrewed in-flight abort test of a Crew Dragon spacecraft in January 2020. SpaceX’s first crewed launch is set for May 27.

As NASAtackles the coronavirus pandemic with the rest of the nation, NASA administrator Jim Bridenstine urges and warns space enthusiasts to stay home next month during SpaceX’s historic first astronaut launch.

NASA administrator Jim Bridenstine and other agency leaders made the public plea Thursday (April 23) during an hour-long video conference on the agency’s response to COVID-19, the disease caused by the novel coronavirus. Bridenstine spoke candidly about the SpaceX’s upcoming Crew Dragon Demo-2 launch, which will be NASA’s first mission to launch astronauts into space from U.S. soil since the agency’s space shuttle program ended in 2011.

“Yes, we are moving forward [with Demo-2],” Bridenstine said. “We are very excited about launching commercial crew.” The mission , he added, will restore NASA’s access to the International Space Station aboard American spacecraft, which “is a mission-essential function.”

But, Bridenstine said, the crowds of space fans that normally turn out for such a launch should stay at home due to social distancing concerns related to the coronavirus.

“We’re trying to make sure we have access to the International Space Station without drawing the massive amount of crowds that we usually would,” Bridenstine added.

SpaceX is one of two companies (Boeing is the other) with multi-billion-dollar NASA contracts to launch astronauts to the space station on a commercial spacecraft. Both companies flew uncrewed test flights in 2019, but SpaceX is the first to launch American astronauts into orbit on an U.S.-built rocket from U.S. soil since the shuttles retired. The Demo-2 mission will launch NASA astronauts Bob Behnken and Doug Hurley to the station.

With such an historic spaceflight, Bridenstine said NASA expects crowds would be even larger than an average launch if there was no pandemic underway. But despite that excitement, Bridenstine stressed that people should “watch from a place that’s not the Kennedy Space Center.”

The space center will actually be closed to the public during the launch, so typical viewing tickets won’t be available, Bridenstine said. Local and state authorities will have to take their own measures for the spectators that flock to nearby public roads and beaches for a launch, he added.

NASA is also taking precautions with its own workforce.

The agency is at “Stage 4” of its “response framework.” This means that all agency facilities are completely shut down and all personnel are working remotely with the exception of mission-critical personnel whose work protects lives or is critical to maintain infrastructure. NASA employees are even controlling NASA’s Curiosity Mars rover from home right now.

In addition to those measures, Bridenstine said, any NASA employees who feel uncomfortable working on the project can request to be reassigned to another position or role that can be done home with absolutely no retribution. However, he added, very few have requested reassignment as “this is a very exciting project and the NASA workforce is very excited about it.”

With these measures in place to prevent the spread of the novel coronavirus, NASA is continuing to make progress both in science and spaceflight missions, as well as with technology developments designed explicitly to fight the disease.

While NASA has had to put some science missions on hold, Bridenstine said, the agency is still doing science with data collected by probes already in space and is still planning to launch the Mars Perseverance rover in July.

“We are, in fact, persevering and we’re going to launch this robot to Mars,” Bridenstine said in response to a Space.com question during Thursday’s briefing.

“We are very proud of staying on schedule,” added David Gallagher, the associate director for strategic integration at NASA’s Jet Propulsion Laboratory. Putting the robot in storage would be extremely expensive and they want to avoid putting off the mission, he said.

In addition to shifting mission timelines and working to ensure the safety of their staff, NASA is also working to develop technologies to be used to treat COVID-19 patients.

NASA engineers have stepped up to the plate and developed a unique COVID-19 specific ventilator that uses one-seventh the parts of a multi-purpose ventilator that would typically be used in an intensive care unit, NASA’s Chief Health and Medical Officer Dr. J.D. Polk shared during the briefing. They are additionally developing a CPAP (or Continuous positive airway pressure) hood to treat patients who do not yet need ventilators, Mike Buttigieg, an engineer at NASA’s Armstrong Flight Research Center, who is working on the new hood, added.

Both of these novel technologies have been submitted to the FDA for emergency use authorization so that they can pass more quickly through testing and get to patients in need faster, NASA officials said.

NASA and SpaceX prepare to launch astronauts from the US again

Surprise! There’s more water on Jupiter than anyone thought

Fraudsters are increasingly using pilfered credit-card numbers and phishing attacks to prey on overwhelmed consumers and banks during the coronavirus pandemic. There has been a big jump in attempted credit- and debit-card fraud since coronavirus shut down the U.S. economy earlier this year, according to Fidelity National Information Services Inc., known as FIS, which assists…

What does all the coronavirus data mean? Fairfax Co. Health Dept. explains

Fraudsters are increasingly using pilfered credit-card numbers and phishing attacks to prey on overwhelmed consumers and banks during the coronavirus pandemic. There has been a big jump in attempted credit- and debit-card fraud since coronavirus shut down the U.S. economy earlier this year, according to Fidelity National Information Services Inc., known as FIS, which assists…