Who is the chess player on Mars? – USA DAILY NEWS
Skip to content 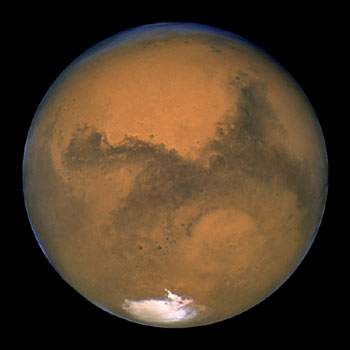 On Wednesday, August 27 2003, at 10:51 GMT, the planet Mars approached the earth closer than at any time during the last 60,000 years. It became the brightest object in the night sky, a beautiful red jewel in the firmament, with an apparent diameter to in the sky of about 25 arc-seconds (on October 13 this year during Mars opposition the planetary disk diameter will be 22.4 arcsec).

In 2003 The two planets, Earth and Mars, were separated by 55,758,006 kilometers (34,646,418 miles). This has not happened since the Neanderthals shared the world with early humans, who as you know were lucky enough to find the Obelisk and learn how to use the thigh bones of animals properly. The next closest approach will be in 2287 – we will bring you live coverage at the time.

In the parlance of astronomers Mars was in “opposition”, a term they have obviously borrowed (without giving due credit) from the chess world. The close approach of the two planets happens regularly when both are on the same side of the Sun. On this occasion Earth was about as far from the Sun as it ever gets, and Mars as close as ever (the orbits of the two planets are not quite circular).

At the time our resident scientist GM John Nunn informed us:

The close approach of Mars suggests that this would be a good time for the Martians to invade Earth. The last time they did so, in June 1902, they caused considerable devastation. I have a personal interest in this because the first Martian cylinder plunged into the sandpits on Horsell Common, just down the road from where I currently live. Apparently they did not use retro-rockets or parachutes, and it has always been a mystery how the relatively fragile Martians survived the deceleration of impact. Moving out from this first landing, they advanced through Ottershaw (where GM Murray Chandler owned a house) and devastated Weybridge and Shepperton. Armed with a heat-ray and a deadly poison gas, it seemed that nothing could stop them. Eventually, as everyone now knows, their invasion was defeated when they caught a nasty cold and died.

The event is commemorated in various ways and has inspired various films and radio broadcasts (see, for example, thisWar of the Worlds movie, in which the invasion was switched to America). Curiously, although the Horsell area has changed greatly in the past century, Horsell Common and its sandpits are still much the same. I am somewhat concerned that the Martians might aim for the same spot again and am keeping a careful watch for any meteorites leaving a strange greenish trail. If one falls, I intend to call Tony Blair or George W. Bush – they’ll know what to do.

The Face on Mars 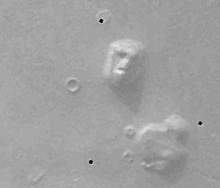 There is another important aspect to this close approach of Mars. Everybody knows that strange rock formations have been photographed on the surface of the planet, the most famous being the “Face on Mars”. It was obtained in 1976 by the Viking Orbiter 1. In the Cydonia region of Mars it photographed a region of buttes and mesas along the escarpment that separates heavily cratered highlands to the south from low lying, relatively crater-free, lowland plains to the north.

One of the images showed a face-like hill, which led many people to argue, mostly in the lay literature, that the hill was artificially shaped. The “Face on Mars” web site provides us with the raw Viking images and a brief tutorial (with examples) of image processing techniques applied to create “better looking” images. 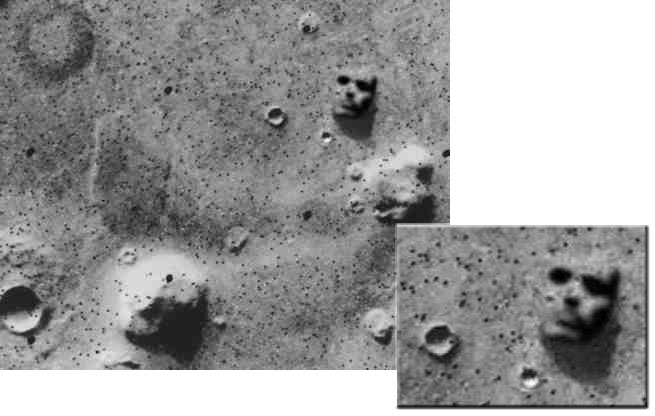 Due to the near approach new images have been obtained which should delight amateur conspiracy theorists all over the world. They show the Cydonia region and the “face” in unprecedented clarity.

Above is the latest Hubble image taken on August 27 2003 at 10:34 GMT, seventeen minutes before the true opposition of Mars. The enlargement reveals an incredible geological formation that looks eerily familiar. Perhaps our readers can help us (and NASA): whom does the rocky formation remind you of?

Oops – Face on Mars was faked!

A week after the above report appeared on our news page (on August 27, 2003) we learned that the “Face on Mars” picture was probably flawed. Javier Sanchez de la Barquera of Monterrey, Mexico, informed us that Hubble cannot take pictures with the zoom given, and that pictures were taken from satellites orbiting mars. 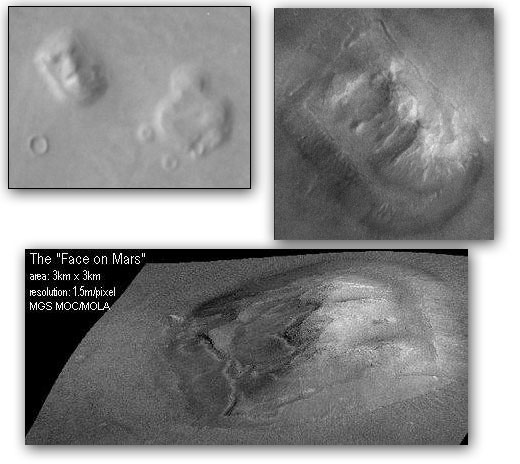 On the top left is the original fase as it appears on most conspiracy sites, next to it a JPL/NASA picture, which softens into the “face,” and below that an angular view which makes it even less face-like.

We investigated the matter and discovered that some misguided soul in the ChessBase team had faked the picture, photoshopping an image of Garry Kasparov into the surface of Mars. We even found what is probably the original source of the picture. 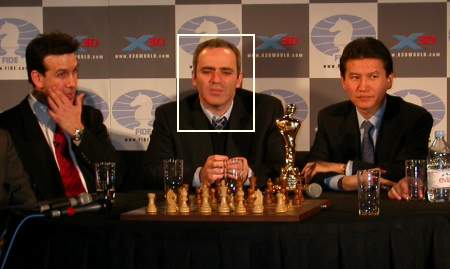 Above is a picture of Garry Kasparov during a press conference. 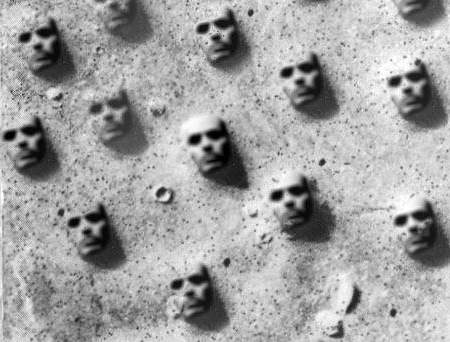 We also traced the joker’s practice efforts – a Mars surface picture with many Kasparov faces copied into it. The prankster simply took the one which looked most plausible.

Our apologies to readers who took the whole business seriously.

How the Americans with Disabilities Act transformed a country