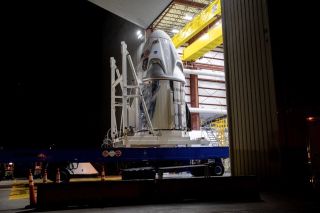 A SpaceX Crew Dragon spacecraft arrives at Launch Complex 39A at NASA’s Kennedy Space Center in Florida, transported from the company’s processing facility at Cape Canaveral Air Force Station on Friday, May 15, 2020, in preparation for the Demo-2 flight test.

The Dragon spacecraft that will fly SpaceX’s first-ever mission with astronauts on board has reached its Florida launch site ahead of a historic liftoff next week.

The arrival marked another big milestone for SpaceX in the leadup to the planned launch of the Demo-2 mission on May 27.

Demo-2 will carry NASA astronauts Doug Hurley and Bob Behnken to and from the International Space Station (ISS). The May 27 liftoff atop a SpaceX Falcon 9 rocket will be the first orbital human spaceflight to launch from U.S. soil since NASA’s space shuttle fleet retired in July 2011. Since then, NASA has relied solely on Russia’s Soyuz spacecraft to perform this taxi service.

Crew Dragon has made one trip to the ISS already, an uncrewed jaunt called Demo-1 that launched in March 2019. The company launched another Crew Dragon in January to demonstrate the spacecraft’s in-flight abort system in case of an emergency during the trip to space.

Demo-2 is designed to fully validate the Crew Dragon-Falcon 9 system, paving the way for operational crewed flights to and from the ISS. SpaceX holds a $2.6 billion contract to fly six such missions, the first of which is expected to launch later this year if all goes well with Demo-2.

The activity at KSC is going to ramp up considerably over the next week and a half as SpaceX and NASA gear up for the launch. For example, Behnken and Hurley will fly to KSC from their home base, NASA’s Johnson Space Center in Houston, on Wednesday (May 20). And NASA’s Demo-2 Flight Readiness Review to decide if the mission is ready for a May 27 launch will begin the following day, agency officials said.

Like SpaceX, Boeing holds an astronaut-ferrying contract with NASA’s Commercial Crew Program, which the aerospace giant will fulfill using a capsule called the CST-100 Starliner. But Boeing isn’t ready to start flying people; Starliner encountered problems during its version of Demo-1, which launched this past December, and wasn’t able to meet up with the ISS as planned. Boeing will re-fly that uncrewed mission before putting astronauts aboard Starliner.

EPA to keep Obama-era mercury rules, but make it harder to tighten them

KENSINGTON, Maryland (AP) — The world hit another new record high for heat-trapping carbon dioxide in the atmosphere, despite reduced emissions because of the coronavirus pandemic, scientists announced Thursday.Measurements of carbon dioxide, the chief human-caused greenhouse gas, averaged 417.1 parts per million at Mauna Loa, Hawaii, for the month of May, when carbon levels in…

Lebanon MP: Protesters outside officials’ homes should be ‘shot’

Your Web Browser may be out of date. If you are using Internet Explorer 9, 10 or 11 our Audio player will not work properly. For a better experience use Google Chrome, Firefox or Microsoft Edge. Fine Gael members have generally expressed antipathy to a coalition involving Fianna Fáil and clear antagonism to any link-up…