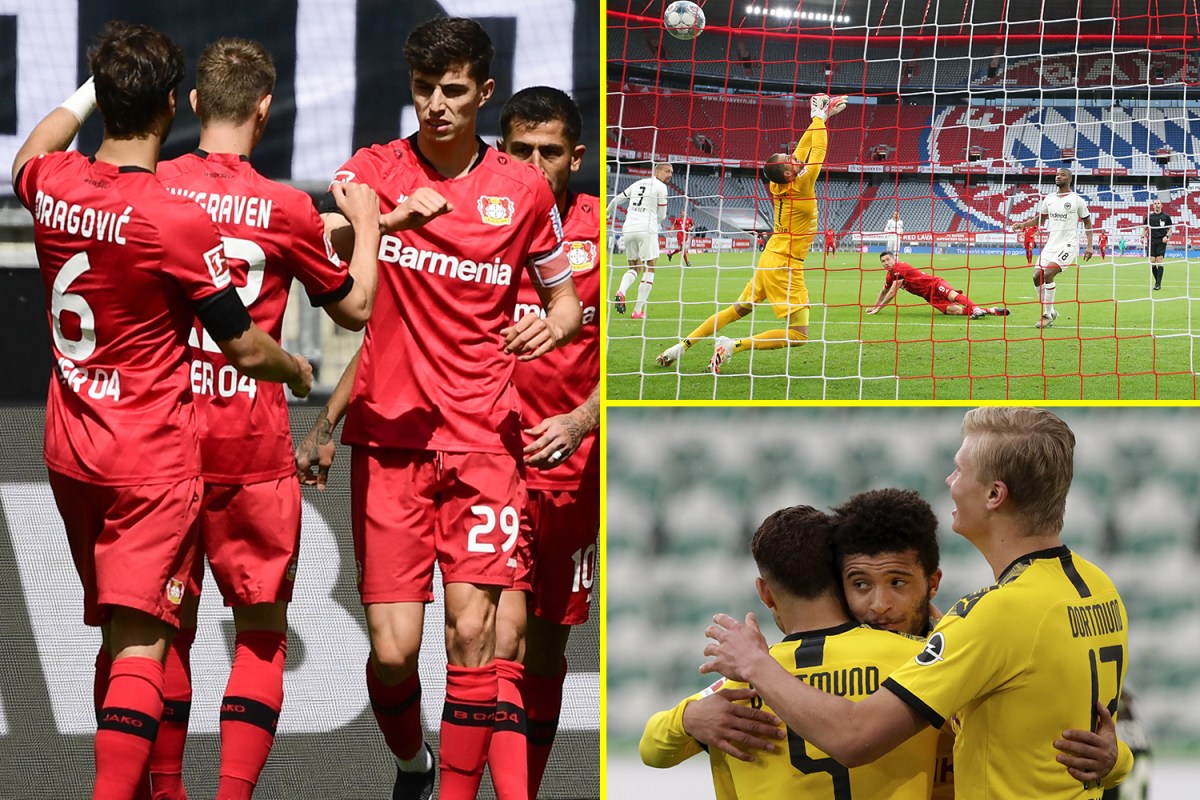 If Premier League clubs were interested in Kai Havertz before the Bundesliga returned, they’ll be totally infatuated now.

The Manchester United and Liverpool target netted his second brace in as many games, helping Bayer Leverkusen to a 3-1 victory at high-flying Borussia Monchengladbach on Saturday.

Havertz, 20, delivered a cheeky finish to slot the visitors in front on seven minutes, and it was his penalty which restored their lead after Marcus Thuram scored a thumping equaliser. Sven Bender’s goal sealed the win for Leverkusen.

Elsehwhere, Borussia Dortmund continued to show no sign of rust following the restart, cruising to a 2-0 victory over ten-man Wolfsburg.

Raphael Guerreiro finished off a fine team move, netting his third goal since the Bundesliga’s resumption last week, before Achraf Hakimi made it two.

England star Jadon Sancho came off the bench and made an impression, nutmegging a defender five seconds after coming on and then setting up the second goal.

Wolfsburg’s task was rendered impossible late on when Felix Klaus saw red for a nasty challenge after a VAR review.

The result put Dortmund a point behind leaders Bayern Munich but the Bavarians restored their four-point cushion with a 5-2 win at home to Eintracht Frankfurt.

It was an entertaining contest at the Allianz Arena with goals from Leon Goretzka, Thomas Muller and a strike from Robert Lewandowski early in the second-half giving the home side a commanding 3-0 lead.

Two quick goals from Martin Hinteregger dragged Frankfurt right back into it but Hansi Flick’s men stepped things up once again and scored two more times – first from Alphonso Davies and then Hinteregger turned the ball into his own net.

Meanwhile, there was a crucial win for Werder Bremen, who claimed a surprise win over Freiburg.

And on Friday night, east met west in the Berlin derby as Hertha Berlin locked horns with rivals Union Berlin.

Last year, a clash between the teams descended into chaos with players having to hold back ultras from entering the pitch.

This one wasn’t quite so hectic but Hertha emphatically claimed bragging rights in the capital, scoring four second-half goals to romp to a 4-0 win.

Coronavirus in Michigan: Here’s where we stand as of Sunday night

What does all the coronavirus data mean? Fairfax Co. Health Dept. explains

Many numbers related to the coronavirus in D.C., Maryland and Virginia are shared each day, and all of the data could be confusing. In Fairfax County, Virginia, for example, work on the system used to report disease data resulted in a smaller number of reported new cases Sunday and a spike in newly-reported cases Monday.…

NHL Proposes a Return to Play With 24-Team Playoff