There’s an age-old joke amongst those who work with/launch rockets and those who cover their missions: If the rocket is ready to go, the weather will force you to try again another day.

But why do NASA, the 45th Space Wing of the Space Force, their safety officers, and all launch providers make such a big deal about the weather?  Who cares if it’s raining 18 km from the pad when the safety rules say rain cannot be closer than 18.5 km?  Isn’t that close enough?

The answers to these questions lie in U.S. rocket history and the sometimes painful and fatal ways we have learned the lessons of what happens when launch officers don’t listen to the weather and what the vehicle is built to handle.

Hundreds and thousands of hours of training, testing and preparation go into readying a rocket, satellite, and crew (if it’s a human flight) for each mission.  The flight hardware must operate and perform flawlessly through the launch count to ignition.

After all of that hard work, there is one item no one can control, and that’s the weather.

Launch Commit Criteria weather is a detailed set of guidelines that outlines the environmental limits a rocket and spacecraft can experience during ascent and landing to ensure a successful end of mission.

And weather Launch Commit Criteria must also take into account not just the 45th Space Wing’s overall Range safety requirements for the protection of people on land, at sea, and in the air, but also the rocket-specific weather requirements determined by the company that owns and operates the vehicle.

Some of those launch operator-specific weather criteria include how close rain can be to the pad at launch, wind speed and direction, upper level wind shear limits, and others. 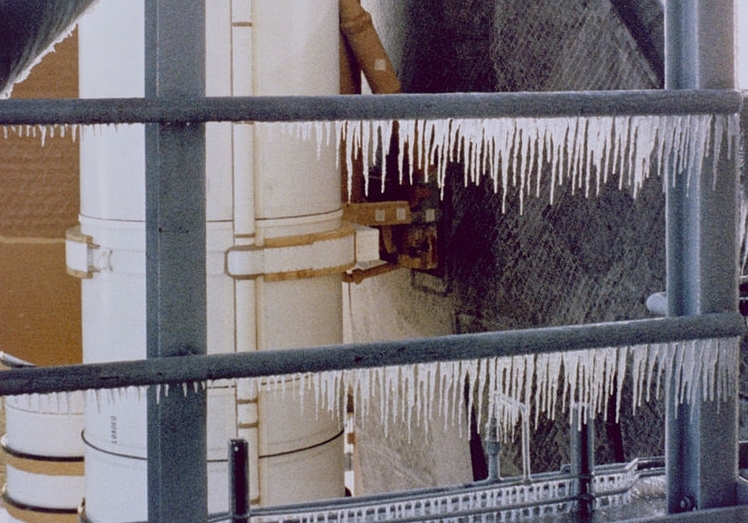 Ice on the launchpad after temperatures dropped well below freezing in the hours before Challenger’s STS-51L launch. (Credit: NASA)

Two of these launch-vehicle specific criteria gave the U.S. the absolute hardest lesson it has had to learn about space flight on 28 January 1986 when the Shuttle Challenger was launched in near-freezing temperatures that were 20℉ colder than the lowest certified operational limit of the Solid Rocket Boosters.

The cold temperatures caused the failure of the primary and secondary O-Ring seals on the aft field joint of Challenger’s right-hand Solid Rocket Booster.  The failure method caused a temporary seal to form as O-ring material became jammed in the hole.

This temporary seal was shattered when Challenger encountered the most-intense upper-level windshear ever for a Shuttle (even through to the end of the program).

Overriding those two vehicle-specific weather rules resulted in the loss of seven people that January morning.

Scrubs for upper level winds today are cause for great commentary on social media.  But as Challenger reminds us, there are serious consequences to flying a vehicle in conditions it’s not built for.

In addition to vehicle specific rules, there are also Range safety requirements launch providers don’t get any input on.  They are the rules in place to protect space center workers and the viewing public on land, in the air, and at sea.

They include some obvious things like lightning rules to make sure a lightning strike doesn’t destroy a vehicle’s electronics and make it impossible to destroy if it flies off course.

But there are less-known rules that come into effect that cause launch teams to have to scrub for lightning even when there is no lightning anywhere near the launch pad. 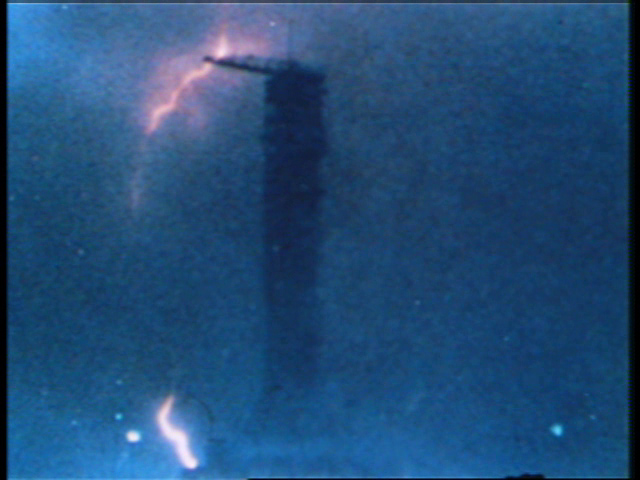 This is an example of a Range weather rule that exists from experience.

It was during Apollo 12 when Pete Conrad, Richard Gordon, and Alan Bean’s Saturn V was struck twice by lightning in the first minute of flight.

The strikes resulted in the failure of a number of critical flight systems, including the Apollo Command and Service Module’s fuel cells and all navigation displays for the crew.  Mission Control received garbled telemetry and communcation from the rocket and crew.

Thankfully, the Saturn V’s flight computer, isolated from the Apollo spacecraft, was not affected by the strikes and kept functioning as if nothing had happened.

Saving the mission was made possible by a single flight controller in Mission Control who remembered from over a year prior a series of strange numbers a team asked for his help in determining where they came from.  He eventually traced them to the Signal Conditioning Equipment (SCE) on the Apollo Command and Service Module.

Inside the Apollo 12 capsule, there was an “SCE” button that had to be pressed to start bringing things back online.  The button was completely unknown to the Flight Director and the mission’s Commander, but Al Bean remembered it from a completely different training simulation.

With telemetry and information restored, the mission continued on to orbit, where a full checkout of the spacecraft resulted in a successful lunar landing mission and return.

What Apollo 12 revealed was a better understanding of how rockets can trigger lightning even when naturally-occurring lightning is not possible.

According to a February 1970 NASA assessment of the Apollo 12 Lightning event, “Lightning can be triggered when an aerospace vehicle with a conductive surface and an ionized exhaust plume distorts the electrical field equipotential lines, thus increasing the potential gradient at the top of the vehicle and below the exhaust plume.”

This is a very technical way of saying that rockets act as giant conductors when they launch through the atmosphere, and that conduction lowers the total amount of electrical charge needed in the atmosphere to trigger a lightning strike even when all of the natural conditions needed for lightning are not present.

Triggered lightning conditions can easily be met when a rocket flies through a non-lightning producing cumulus cloud or through thick clouds in general.

In this event, a launch would be scrubbed for lightning (technically for the cumulus/thick cloud rule) even though no lightning is in the launch area.

Another element to launch weather calculations is abort needs.

For launches without people, the launch weather is largely confined to the conditions in the area around the pad.  But once a crew is onboard, an additional commit criteria for abort location weather is needed. 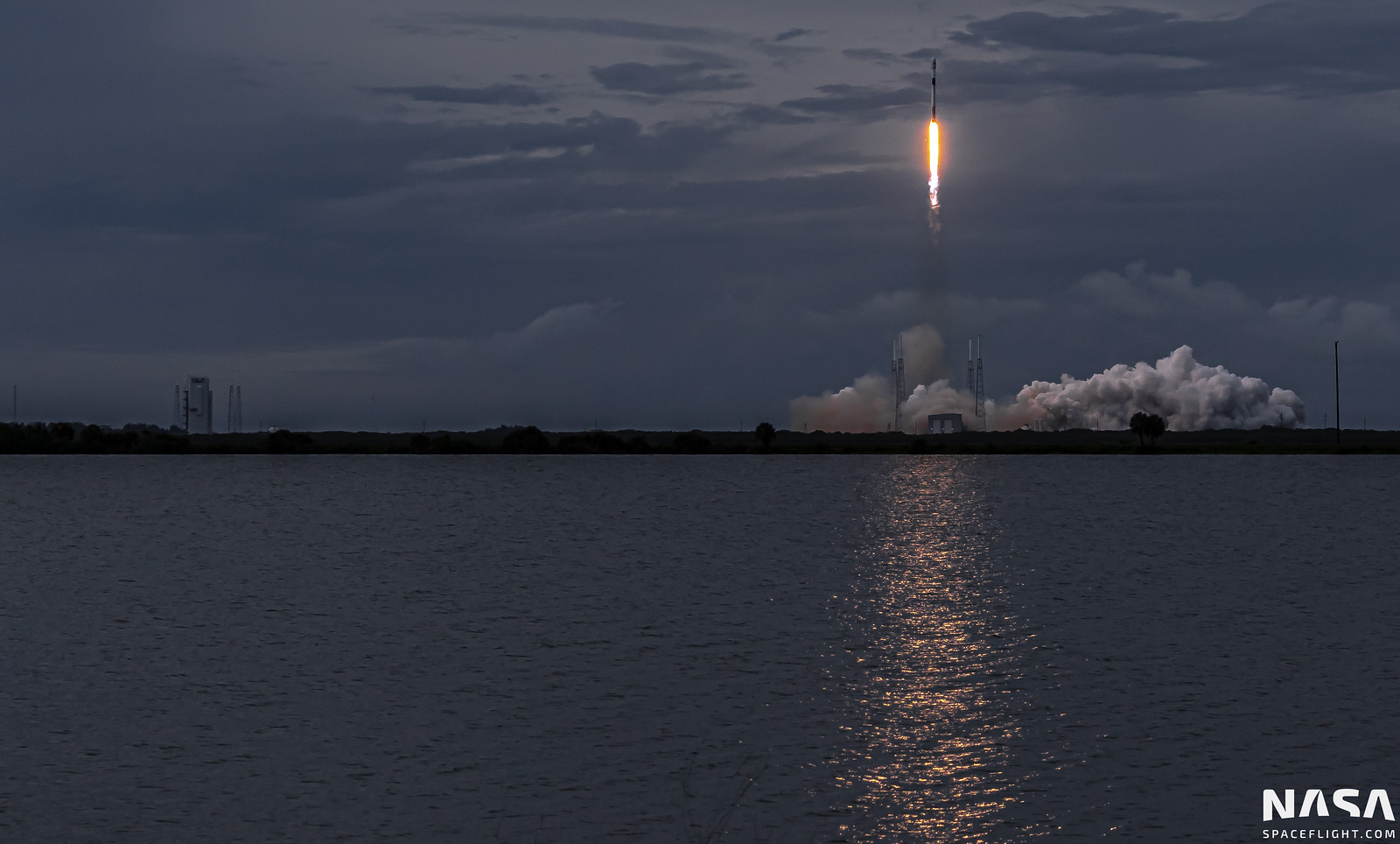 This can provide additional frustration to those who travel hundreds and even thousands of miles to a launch site, as abort weather scrubs can and do happen when the launchsite weather is absolutely perfect.

Back in the Shuttle era, abort weather considerations were somewhat easy to assess as the Shuttle Orbiters had to land on runways where support teams could make test flights to confirm all weather rules were “go” for an abort landing.

The Shuttle was only permitted to launch if it was able to perform all three abort scenarios: Return To Launch Site (RTLS), Trans-oceanic Abort Landing, and Abort Once Around to land back at either Kennedy or Edwards Air Force Base in California after a single orbit of Earth.

These abort location launch day forecasts were provided in conjunction with the NOAA National Weather Service and their Space Flight Meteorology Group in Houston Texas.

For Demo-2, those two groups will be called on for the first time in nearly nine years to provide launch day abort landing weather forecasts for a crew mission to the SpaceX launch team at Kennedy, the SpaceX flight control team in Hawthorne, California, and the NASA Mission Control team in Houston, Texas.

For the long-awaited Crew Dragon mission with Bob Behnken and Doug Hurley on Wednesday afternoon, a number of weather constraints are in place for launch and recovery.

The following weather Launch Commit Criteria must be satisfied for Crew Dragon to launch: 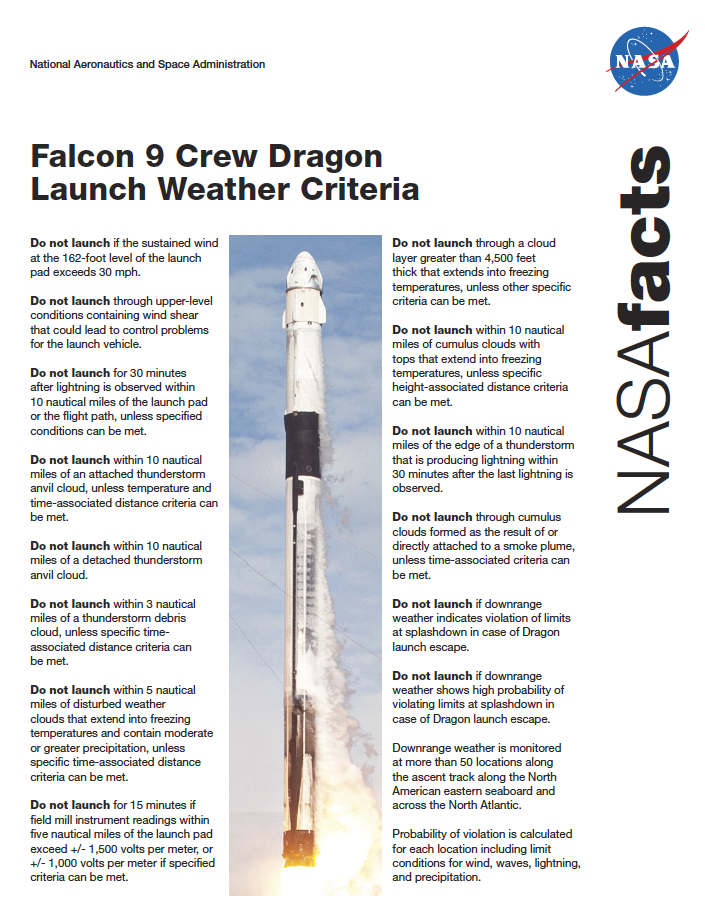 Like the Space Shuttle, in order for Falcon 9 to launch with Crew Dragon, weather at specific locations within Dragon’s four abort zones must be within recovery limits.

Benji Reed, Director of Crew Mission Management for SpaceX, stated during the Flight Readiness Review press conference Friday that NASA and SpaceX will be monitoring and measuring 50 different points of weather data from Launch Complex 39A, up the eastern coast of the U.S. and Canada, and across the Atlantic to Ireland.

Some of these data points will include wind speed, direction, wave depth, and sea conditions.

NOAA satellite and ocean buoy data with analysis by the Space Flight Meteorology Group will play a critical role in determining if Crew Dragon will be able to lift off on its historic mission Wednesday.

Yes, a launch delayed because of weather is disappointing and can often be confusing as everything can appear perfect.

But these rules are in place to protect not just the vehicle, but all launch personnel, cargo, spectators, and, of course, the astronauts.

Houston coronavirus updates: What you need to know for April 4

Lincoln v Liverpool LIVE: Diogo Jota on bench but no Thiago as Premier League champions look to set up

OPINIONNjeri Rutledge and Geoffrey S. Corn, Opinion contributors Published 12:35 p.m. ET Sept. 24, 2020 | Updated 2:59 p.m. ET Sept. 24, 2020Breonna Taylor’s death has stirred justified concern, but the evidence shows that the grand jury’s decision to indict only officer Hankison is correct.For months there has been a call for justice for Breonna…