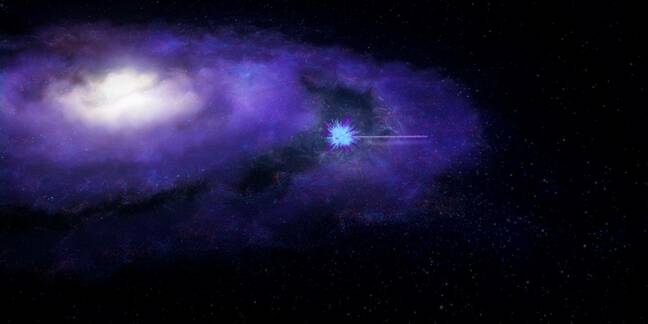 Astronomers have finally found hard-to-detect visible matter scattered across space, left over from the Big Bang, after searching for nearly thirty years, according to a study published in Nature.

“We know from measurements of the Big Bang how much matter there was in the beginning of the Universe,” said Jean-Pierre Macquart, lead author of the paper and an associate professor at Curtin University, Australia, this week. “But when we looked out into the present universe, we couldn’t find half of what should be there. It was a bit of an embarrassment.”

Macquart isn’t referring to dark energy or dark matter. Instead, the study deals with baryonic matter, which is normal stuff made of protons and neutrons. The computer or device you’re using right now to read this is made up of it. This matter should also be out there in space, too, lingering between the galaxies and stars, but it’s missing, or rather, boffins couldn’t find it. The material is spread incredibly thinly across the void, making it difficult to detect.

But now scientists have managed to find some of that missing matter by inspecting fast radio bursts, which are powerful radio waves that are emitted for a few milliseconds. By following the line-of-sight of each blast, they were able to determine the electron column density, and count every baryon ionized by the electromagnetic wave.

“The radiation from fast radio bursts gets spread out by the missing matter in the same way that you see the colours of sunlight being separated in a prism,” Macquart said. “We’ve now been able to measure the distances to enough fast radio bursts to determine the density of the universe. We only needed six to find this missing matter.”

The density of missing matter they found was tiny; it’s equivalent to about “about one or two atoms in a room the size of an average office.” The measurement allows the academics to estimate the amount of missing matter in the universe.

The fast radio bursts were observed using the Australian Square Kilometre Array Pathfinder (ASKAP) telescope array at the Murchison Radio-astronomy Observatory located in Western Australia. “ASKAP both has a wide field of view, about 60 times the size of the full Moon, and can image in high resolution,” said Ryan Shannon, co-author of the paper and an associate professor at Swinburne University of Technology.

“This enables the precision to determine the location of the fast radio burst to the width of a human hair held 200m away,” he concluded. ®

Christmas Brings Millions of Filipinos the Joy of Homecoming

One way to fight climate change: Make your own glaciers.

When Hamilton landed on Disney Plus last week, it seemed like everyone was clamoring to watch it. In a new company all-hands, CEO Bob Chapek stressed that Hamilton brought in a lot of new subscribers and played an important part in Disney Plus’ growth, according to an audio recording obtained by The Verge. Chapek didn’t…

CLOSE Dr. Anthony Fauci speaks to how personal responsibility and social distancing is the key to ending the spread of the coronavirus. USA TODAYPHOENIX – More than 40% of staff members have tested positive for COVID-19 at the Eloy Detention Center in Arizona, one of the nation’s largest immigrant holding facilities, underscoring the severity of…