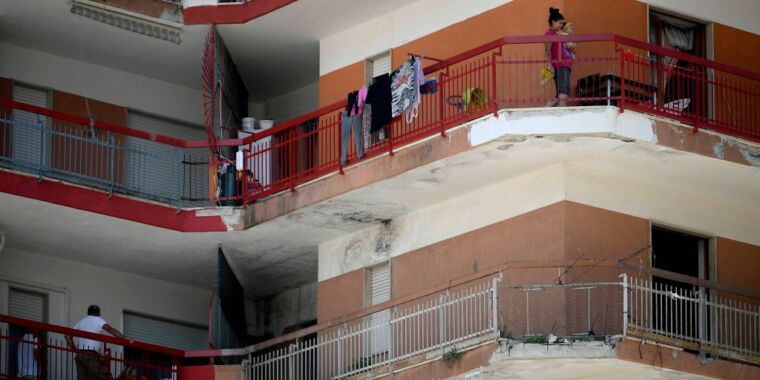 Italy was one of the countries hit earliest as the COVID-19 pandemic spread beyond its origin in China, and the country struggled with a sudden surge in cases that threatened to overwhelm its health services. But Italy turned into a success story, as an aggressive lockdown reversed its curve, causing new daily cases to drop from a peak of over 6,000 down to a steady flow of about 300. Compared to a number of other industrialized democracies, this was a major success.

Now, a team of researchers largely based in Italy is looking more carefully at the pandemic’s spread there as well as the impact of control measures. The researchers have gotten most of the population of a small town to agree to testing before and after Italy’s lockdown, providing a window into the behavior of the virus and how things changed during the lockdown.

The location in question is called Vo’, a small town in northern Italy near Padua and Verona. Vo’ has a population of a bit over 3,000 residents, and most of them (86 percent) agreed to take part in the study. In late February of this year, just as Italy entered lockdown, all the willing participants gave samples that were tested for the presence of SARS-CoV-2. Two weeks later, as Italy prepared to emerge from its lockdown, the participants were sampled again. Any health issues and contacts in the intervening time were surveyed, allowing people to trace contact networks, as well.

This before-and-after sampling allowed the researchers to estimate how the virus had been spreading prior to the lockdown, how it spread during it, and track the development of symptoms among those infected. The information the team gathered should thus provide the sort of information we need to know to design more effective control measures and build better epidemiological models.

Italy reported its first known case of the coronavirus on February 20 of this year, but the virus had clearly been circulating prior to that. By the time the first survey was done on February 24, 73 individuals in Vo’ were already infected, or 2.6 percent of the participants. Over the ensuing weeks, 40 percent of the infected individuals never developed any symptoms, consistent with a variety of studies that suggest a high rate of asymptomatic infections. The researchers quantified the amount of virus present but saw no difference between those with symptoms and those without.

Over the course of the study, 16 percent of those infected ended up in the hospital. While most of these were over 60 years old, there were people under 60 who ended up with severe cases.

Older individuals were also nearly three times more likely to develop an infection, also consistent with what’s been seen elsewhere. That’s in striking contrast to children. Of the 234 children in the study population, none ended up infected by the virus, even though some of them shared a house with an infected individual.

In between and after

A bit over half of the people the researchers found infected at the start of the survey had no detectable virus two weeks later, indicating they had cleared the infection. The researchers estimate that, on average, it took about nine days to clear the virus, with younger individuals and those with symptoms clearing it faster. For those who develop symptoms, the amount of virus present appeared to peak on the day symptoms first become apparent.

The survey at the end of lockdown shows just how effective Italy’s policy approach was. At this point, there were only 29 cases of active infections, or 1.2 percent of the total population. More significantly, only eight of those were new infections. The authors estimate that, prior to lockdown, each infected individual was transferring the virus to an average of 2.5 additional people. During the lockdown, that value dropped to 0.4, a rate at which the pandemic can’t be sustained.

Two of those eight newly infected individuals appear to have picked up the virus from an asymptomatic carrier, supporting the idea that infectivity isn’t strictly related to symptoms. The authors also estimate that people are typically able to transmit the virus for about four to seven days over the total course of their infection.

These numbers shouldn’t be viewed as definitive. There are undoubtedly some details of the social interactions within Vo’ that won’t apply elsewhere. But it’s also probably a lot closer to “normal” interactions than other cases where we’ve seen these sort of detailed surveys of populations done, such as cruise ships. And, with enough examples like Vo’, we can get a clearer picture of what the typical behavior of the virus looks like.

And, just as critically, the data clearly shows that we can control a potentially catastrophic pandemic through policy decisions without having to wait for a vaccine or fully effective treatment. As the authors put it, “The experience of Vo’ shows that despite the silent and widespread transmission of SARS-CoV-2, transmission can be controlled and represents a model for the systematic suppression of viral outbreaks under similar epidemiological and demographic conditions.” While the lockdown clearly hasn’t eliminated infections in Italy, it has helped bring them to a low-enough frequency that less severe restrictions combined with contact tracing now seem to be able to limit the pandemic’s spread within Italy.

DoubleDown is going public: Why isn’t its IPO worth more?

Miriam Lord: Minister for Agriculture tries to get himself out of the manure

In an explosive debut, the new Dáil burst from the Leinster House blocks on Tuesday. The coalition’s first day in full session after Government formation brought with it the first abject apology from a Government Minister. That’s quite the start. And it came after a litany of embarrassing episodes for new Taoiseach Micheál Martin, busily…

‘It’s time to do it’: Trump vows to put ‘a lot of pressure’ on governors to reopen schools this fall

Miriam Lord: Minister for Agriculture tries to get himself out of the manure

In an explosive debut, the new Dáil burst from the Leinster House blocks on Tuesday. The coalition’s first day in full session after Government formation brought with it the first abject apology from a Government Minister. That’s quite the start. And it came after a litany of embarrassing episodes for new Taoiseach Micheál Martin, busily…

‘It’s time to do it’: Trump vows to put ‘a lot of pressure’ on governors to reopen schools this fall