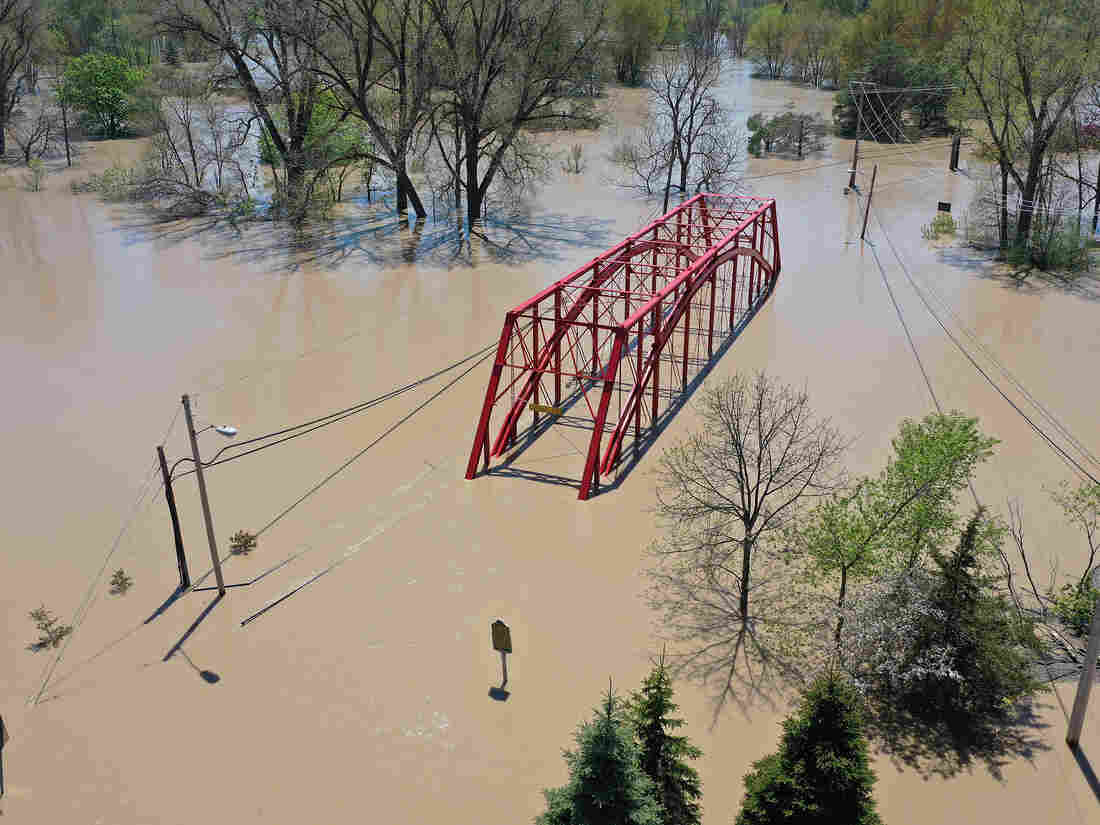 A aerial view of floodwaters flowing from the Tittabawassee River into the lower part of downtown Midland, Michigan, on May 20. Thousands of residents were ordered to evacuate after two dams collapsed, causing flooding.

Two crises collided this spring in Michigan. The state was already under a coronavirus lockdown when a catastrophic storm hit and a pair of dams failed, flooding the city of Midland.

The local hospital, MidMichigan Medical Center – Midland, hired a disaster recovery company to clean up the mess, including a water-logged basement and morgue. More than 100 workers — many of them recent immigrants — were brought from as far away as Texas and Florida. Bellaliz Gonzalez was one of them.

“There were cracks in the safety protocols,” Gonzalez, an asylum-seeker from Venezuela, said in Spanish through an interpreter. “We would start working without masks and then the supervisors would say, ‘We’re going to go look for masks,’ when we were already working inside!” 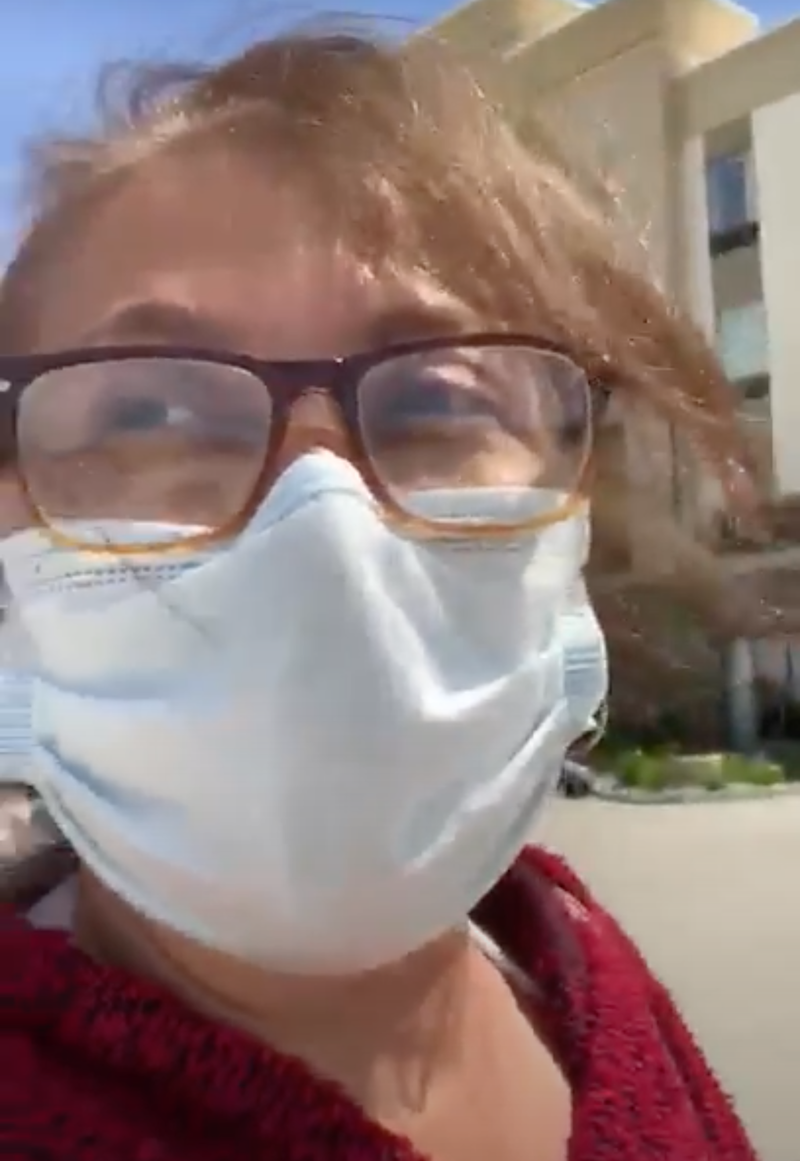 Bellaliz Gonzalez recorded a video where she said many recovery workers had tested positive for the coronavirus and many were feeling sick as they were packed into vans and transported home from Midland, Mich.

Bellaliz Gonzalez recorded a video where she said many recovery workers had tested positive for the coronavirus and many were feeling sick as they were packed into vans and transported home from Midland, Mich.

Michigan had strict rules in place for essential workers during the pandemic, but Gonzalez and other workers interviewed by NPR said those rules weren’t followed. The workers said they were put up in cramped hotel rooms, and weren’t given enough protective equipment.

Many of the disaster recovery workers who came to Midland did get sick. A cluster of roughly 20 confirmed cases of coronavirus drew the attention of local health officials. It also shined a light on a multi-billion dollar industry that’s growing fast as climate-driven disasters become more frequent and more expensive.

“These workers are essential, but no one behaves like it,” said Saket Soni, the founder and director of a non-profit group called Resilience Force, which advocates for recovery workers.

Like workers in other industries hit hard by the coronavirus, Soni says recovery workers risk getting and spreading the virus — not just to each other and to their families but to the communities where they live and work.

“In a sense, they’re like the farm workers and meat packers … with one difference,” Soni said. “This is a workforce on the go … that spends most of the year traveling from place to place, fixing up towns, cities, homes and buildings. And that’s an additional vulnerability.”

Soni says the pandemic has revealed longstanding problems in how the disaster recovery industry treats a workforce that cleans up and rebuilds after hurricanes, wildfires and flooding. Many of the workers are asylum-seekers or undocumented immigrants who don’t speak much English and are afraid to complain about working conditions.

Gonzalez, who is 54, worked as an environmental engineer in her native Venezuela before fleeing to the U.S. to seek asylum two years ago. She says she got sick with a high fever in Michigan but tested negative for COVID-19.

Gonzalez says she was appalled at the working conditions. The first day on the job, she says she asked if there were going to be temperature checks, and was told there were no thermometers.

“We were treated like animals,” Gonzalez said. “They didn’t care about our well-being and our lives, they didn’t care that we are in the middle of a pandemic.”

After the outbreak in Michigan, the finger pointing began.

“We had some people from out of state come in to help, and we are grateful for help, but they brought COVID-19 with them,” Gov. Gretchen Whitmer said in an interview with member station WDET in Detroit last month.

No one knows for sure whether the workers brought coronavirus to Michigan, or caught it there. But we do know what happened next: The workers left town, taking the virus with them.

“We would have preferred if they would have quarantined here in Michigan, but they traveled home,” Whitmer said.

Public health workers there say they weren’t able to communicate directly with the recovery workers because no one on the contact-tracing team speaks Spanish.

“You really shouldn’t cram four and five people into a hotel room that aren’t necessarily family members, or put them in a situation where they’re thousands of miles from home where they can be exposed to the virus,” said Joel Strasz, a public health officer in Bay County, Mich., where the workers were staying.

“All of those conditions are going to really exacerbate the situation, spread the virus,” he said.

The MidMichigan Medical Center thought the clean-up company it hired was taking steps to ensure worker safety, according to Julie Newton, an infection prevention nurse at the hospital.

“I was told that they checked for symptoms and temperatures every day,” Newton said. “And if someone had symptoms or temperature, they were sent to be tested and were not allowed to work.”

Newton said the workers she saw were wearing masks and gloves, and that she didn’t talk to the workers directly because she doesn’t speak Spanish, either.

“It didn’t occur to me to go through and ask a bunch of questions” about whether workers were wearing masks, or how many people were staying in a hotel room, Newton said. “I just expected that they were making sure that those things were happening.”

Servpro is a disaster recovery company with franchises around the country, including the one in Michigan hired by the hospital for the clean-up effort. Neither Servpro nor the local franchise responded to requests for comment.(Editor’s note: Servpro is an NPR underwriter.)

Servpro’s website says its workers always adhere to “cleaning and decontamination standards set by the Centers for Disease Control and Prevention and local authorities.”

BTN Services, a Houston-based company that provides cleaning and staffing services, was a subcontractor on the hospital job. CEO Alejandro Fernandez told NPR that there was “a whole bunch of misinformation going around” but declined to elaborate, and did not respond to interview requests.

The structure of the industry, with multiple layers of contractors and subcontractors, makes it easier for employers to avoid accountability, says Soni from Resilience Force.

“That’s a huge problem,” Soni said. “It means no one owns and pays for the standards to be enforced. No one is ultimately accountable.” 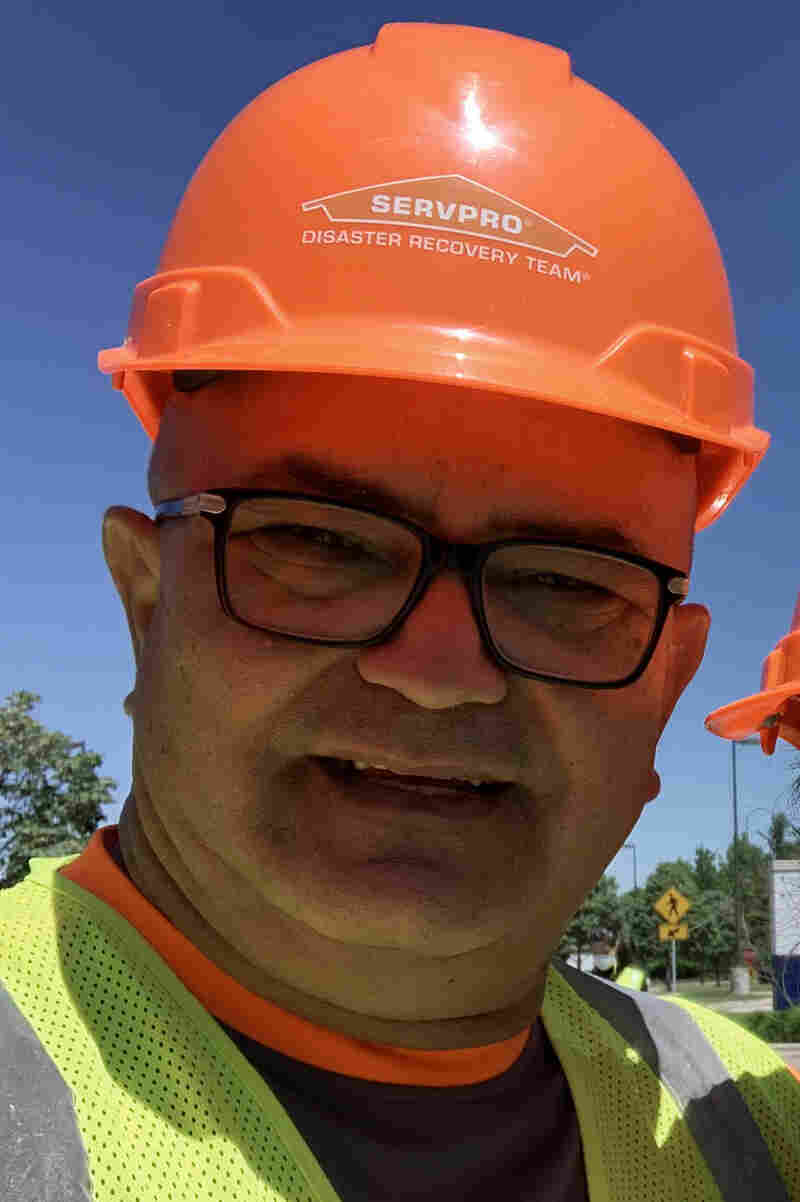 Recovery worker Armando Negron stands outside a hospital in Michigan. Negron tested positive for COVID-19 while in Michigan and headed home to Florida, where he landed in the hospital for six days. 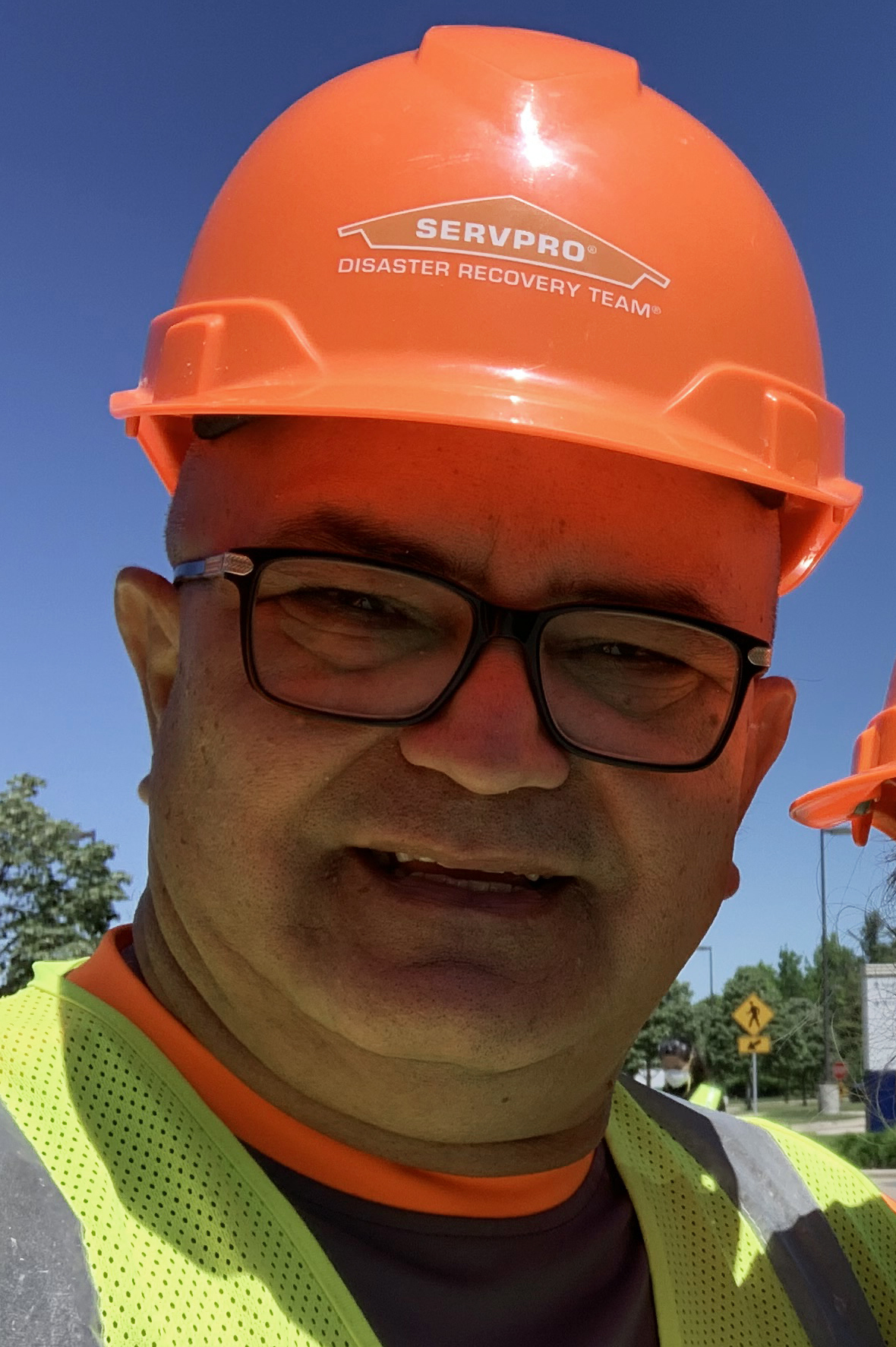 Recovery worker Armando Negron stands outside a hospital in Michigan. Negron tested positive for COVID-19 while in Michigan and headed home to Florida, where he landed in the hospital for six days.

The workers on the hospital job say they asked for the work site’s COVID-19 preparedness plan, as required by the state under a series of executive orders signed by the governor. But the workers say they never saw one.

Once workers in Michigan began testing positive for coronavirus, they say they were put on vans that drove them back to Florida and Texas. Several workers said they asked to be quarantined in Michigan but were told they’d have to pay for their own housing if they stayed.

Bellaliz Gonzalez recorded a video on her phone in Michigan, just before the workers packed into vans to go home. “We are all sick, some have tested positive, others have not been tested but have symptoms,” she said in the video.

One of the workers who got sick was Armando Negron. He said he worked in the hospital morgue without a mask before testing positive for COVID-19. He headed home to Florida, where he landed in the hospital for six days. Negron, who was born in Puerto Rico, is 56 and has survived two heart attacks.

“I was coughing so hard for 10 to 15 minutes nonstop, I felt that my chest was going to explode,” Negron said in Spanish through an interpreter.

“This virus feels like a fire that gets inside your body. You don’t feel good sitting down, standing or laying down. It’s debilitating and I feel very tired, I don’t feel normal,” he said.

Meanwhile, the demand for disaster clean-up continues in spite of the coronavirus. Negron says that half a dozen people he worked with in the morgue went directly from Midland to another job site in the Midwest. Two of them, he said, got sick and have been hospitalized.

New York Attorney General Letitia James has filed a bombshell lawsuit in a state court seeking to dissolve the National Rifle Association and alleging millions in donor funds were diverted under the leadership of NRA president Wayne LaPierre. The NRA “operated as a breeding ground for greed, abuse and brazen illegality”, James said in a…