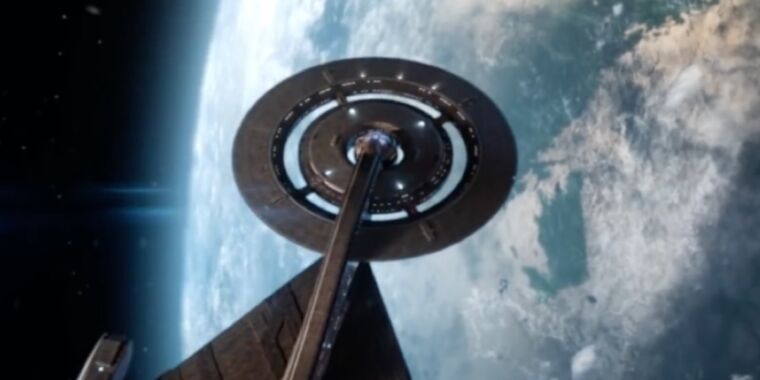 It’s Star Trek Day today, marking the 54th anniversary of the TV debut of Star Trek: The Original Series. CBS All Access celebrated by streaming an entire day of programming related to the franchise, including several panels for its ongoing and forthcoming series. Among other tidbits, CBS dropped the first trailer for Star Trek: Discovery‘s third season.

(Spoilers for first two seasons below.)

Discovery is a prequel to the original Star Trek, set roughly 10 years before Captain Kirk and his crew took over the USS Enterprise and boldly went where no man had gone before. It stars Sonequa Martin-Green as Michael Burnham, an orphaned human raised on the planet Vulcan by none other than Sarek (James Frain) and his human wife, Amanda Grayson (Mia Kirshner)—aka, Spock’s parents, which makes her Spock’s adoptive sister.

As I’ve written previously, in S1, Michael had a promising career as first officer of the USS Shenzhou under Captain Philippa Georgiou (Michelle Yeoh)—until a desperate act to prevent a war with the Klingons drove her to defy orders and essentially commit mutiny. Casualties aplenty ensued. The season’s broad narrative arc was partly her redemption story, as she joined the crew of the USS Discovery at the behest of Captain Gabriel Lorca (Jason Isaacs). The rest of the season involved fighting the Klingons and traveling to a mirror universe, with some major consequences. The final shot showed Discovery meeting up with the USS Enterprise.

In the second season, Christopher Pike (Anson Mount) temporarily replaced Lorca as captain of the Discovery while the Enterprise was undergoing repairs, with Rebecca Romijn making her debut as Number One. There was more of a return to the classic standalone episode structure, with a season-long arc involving the mysterious appearances of a “Red Angel” and a rogue Starfleet AI called Control who sought to wipe out all sentient life in the universe. That’s where Spock came in: he’d had recurrent visions of the Red Angel since childhood and teamed up with his estranged sister, Michael, and the rest of the Discovery crew to foil Control’s nefarious plan.

The big reveal was that the Red Angel was actually a time travel suit worn by Michael’s mother. She had accidentally jumped 950 years into a bleak future in which all sentient life has been destroyed by Control and had been traveling through time leaving signals (the Red Angel visions) in hopes of altering that future. In the S2 two-part finale, Michael donned a copy of her mother’s suit to lead Discovery over 930 years into the future. The crew of the Enterprise told Starfleet that Discovery was destroyed in the battle and were ordered to never speak of it or the crew again. Spock was unable to join Michael and the rest of the crew on that journey, if for no other reason than to preserve the canonical timeline. The good news is that a spinoff series featuring Pike, Number One, and Spock, together on board the USS Enterprise, is already in development—likely also a prequel to TOS, given what we know of Pike’s ultimate fate.

The third season will explore the crew’s adventures in that unknown future. Per the official synopsis: “After making the jump in the second season finale, season three of Star Trek: Discovery finds the USS Discovery crew dropping out of the wormhole and into an unknown future far from the home they once knew. Now living in a time filled with uncertainty, the USS Discovery crew, along with the help of some new friends, must together fight to regain a hopeful future.”

When CBS announced it had renewed ST: Disco for a third season, we also learned that writer and producer Michelle Paradise would be promoted to co-executive producer, running the show alongside Alex Kurtzman, who took over the show during S2 after the previous showrunners departed amidst workplace controversy. During today’s panel, Kurtzman revealed that the United Federation of Planets still exists in this far-flung iteration but in a substantially smaller and weakened form. The mission of S3 is to restore the Federation to its former glory.

Oh, and apparently this season will also feature a space cat:

The trailer finds Michael landing on a mysterious planet in the future and discovering that life forms still exist there. The Discovery has crash landed, but its crew is intact. Michael also gets a hunky love interest this season in the form of Book (David Ajala), who tells her about a mysterious event called “the Burn”—”the day that the galaxy took a hard left.” Fan favorite Philippa Georgiou (Michelle Yeoh) appears to be in fine fighting form. And Michael seems to be growing into a formidable leader, undaunted by the challenges they face. “A federation isn’t just about ships,” she declares. “A federation is its people.”

The third season of Star Trek: Discovery is slated to debut on October 15, 2020, on CBS All Access,

Curio, the curated audio platform for journalism, has closed $9M Series A funding

Last call for early-stage founders to exhibit at Disrupt 2020

By Storm Gifford New York Daily News | Sep 18, 2020 at 8:13 PM A Russian space director claims that Venus is a Russian possession. (ShutterStock) Everybody wants to rule the world, claims Tears for Fears, but Russia has set its sights beyond Earth. Dmitry Rogozin, the director of Roscosmos — a Russian-run cosmonaut and…

Independent Alyse Galvin, the Democrats’ House nominee, sued to stop this.September 19, 2020, 3:14 AM• 7 min readThe Alaska Supreme Court declined to overturn a Superior Court ruling Friday that declared the state elections division did not have to reprint 2020 general election ballots that do not include candidates’ party affiliations, delivering a blow to…