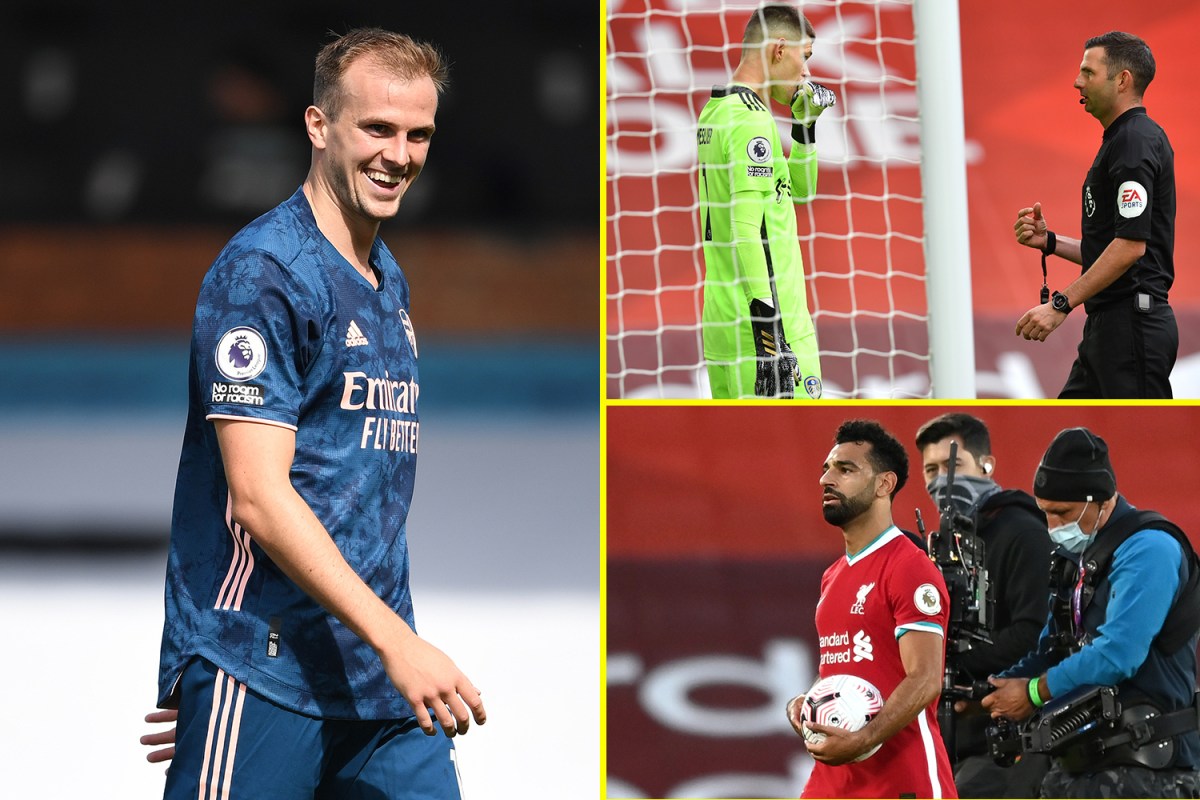 The Premier League returned to action on Saturday after a significantly shorter summer break than usual.

This year’s combination of lockdown, Project Restart and the August Champions League tournament made it seem like football’s barely been away in recent weeks, but it was still good to get the Prem back up and running.

Before a ball was even kicked, Arsenal provided some entertainment.

Ceballos and Nketiah, who both started on the bench for the Gunners’ trip to Fulham, were caught violently pushing and shoving after a fallout during a training drill.

Nketiah appeared riled by a strong challenge from Ceballos, who then pushed his teammate away.

The ball then maked its way back to Nketiah, and the pair squared-up to one another.

Arms begin to flail before their fellow substitutes get involved to calm things down.

Ceballos has since taken to Instagram to insist there is no lasting issue between him and Nketiah.

Arsenal fans had to double take after seeing an image put up by their club pre-match on Saturday.

Tierney’s positioning in front of Willian made it look as though he’d drastically changed his hairstyle over the break.

The image went viral and saw some creative replies in response.

The Gunners’ centre-back channelled Ronaldinho for a brief moment against Fulham.

If his shot had ended in a goal, Holding would have had assist of the season wrapped up on day one.

Holding off the threat of Fulham’s Aboubakar Kamara, the centre-back juggled the ball on his knee before playing in his teammate, who ended up winning a corner just after half-time.

Alexandre Lacazette applauded Holding and could not contain the smile and burst of laughter that followed.

The decision was reviewed by the Video Assistant Referee but as part of changes made from last season, things were done differently this time.

As is the case in Europe’s other big referee, the on-pitch referee reviewed the decision using the monitors on the side of the pitch.

After careful deliberation, Jon Moss overturned his original call and Walker-Peters was reprieved with Moss just giving him a yellow card.

The 2020/21 Premier League ball got used for the first time on Saturday.

Straight away, Salah became the first player to take it home with him as he got a hat-trick.

Liverpool won 4-3 at home to Leeds in the end, with the Egyptian firing home a late winner from the penalty spot.

Prior to Salah’s winning penalty though, Leeds goalkeeper Illan Meslier decided to have a bit of fun.

In an attempt to distract the Liverpool forward he jumped up and down, side to side along the frame of his goal.

It was similar to the antics available on FIFA for those trying to save a spot kick.

Ultimately Salah had the last laugh as he smashed the ball home and won the match for his side.

Shams: Dates and details from NBA’s calls with Board of Governors and GMs

By Storm Gifford New York Daily News | Sep 18, 2020 at 8:13 PM A Russian space director claims that Venus is a Russian possession. (ShutterStock) Everybody wants to rule the world, claims Tears for Fears, but Russia has set its sights beyond Earth. Dmitry Rogozin, the director of Roscosmos — a Russian-run cosmonaut and…

Independent Alyse Galvin, the Democrats’ House nominee, sued to stop this.September 19, 2020, 3:14 AM• 7 min readThe Alaska Supreme Court declined to overturn a Superior Court ruling Friday that declared the state elections division did not have to reprint 2020 general election ballots that do not include candidates’ party affiliations, delivering a blow to…