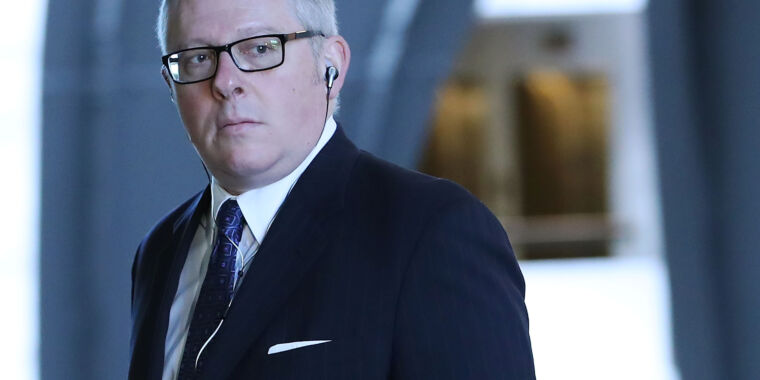 HHS said Caputo is leaving to “focus on his health and the well-being of his family.”

Michael Caputo—the controversial spokesperson for the US Department of Health and Human Services, most recently known for watering down federal reports on COVID-19, railing against social distancing measures, and warning of left-wing “hit-squads” planning a post-election insurrection—has taken a 60-day leave of absence from the department.

Caputo “decided to take a leave of absence to focus on his health and the well-being of his family,” the HHS said Wednesday in a statement sent to Ars.

Alexander “was hired to engage with the department on a temporary basis,” the statement noted. “Dr. Alexander will be leaving the department,” it added concisely.

The departures come as no surprise after a tumultuous few days. On Monday, Caputo made startling headlines with a Facebook live video in which he accused government scientists of “sedition” and claimed the Centers for Disease Control and Prevention housed a “resistance unit.” He also warned that left-wing “hit-squads” are preparing for an armed uprising after the election and spoke of long “shadows” in his apartment. He suggested he was personally in danger and said his “mental health has definitely failed.”

The point resonated with comments he made in a politically supercharged HHS podcast, released September 11. After spending much of the podcast downplaying COVID-19, he noted how daily work on the pandemic has shaken him. “I find myself every morning, the first time I use my voice, I’m talking about death,” Caputo said. He noted heart-wrenching accounts from doctors who watch their COVID-19 patients die: “The looks on their faces when they’re dying is just something that they can’t forget. These doctors can’t forget it. And… this is the first thing I talk about in the morning.”

But Caputo has also referenced problems with his physical health. In an emergency staff meeting at the HHS Tuesday—in which he apologized for his comments about government scientists—he reportedly suggested he wanted to take a medical leave of absence. And in a text message to a New York Times reporter Wednesday, he said he was taking leave so that he could “pursue necessary screenings for a lymphatic issue.”

Caputo’s departure comes after a short tenure at the HHS. He was installed by the White House in April of this year, despite having no background in health care. The move was seen as an attempt by the White House to exert more control over HHS Secretary Alex Azar.

Caputo’s background is as a political operative. He is as a protégé of Roger Stone who worked as a Moscow-based advisor to Boris Yeltsin and did public relations work for Vladimir Putin before becoming a Trump loyalist. As such, he relied on Alexander as a scientific advisor, who has a background in epidemiology.

Alexander is listed as a part-time professor at McMaster University in Ontario, Canada, but according to reporting by The Washington Post, the University sought to distance itself from the controversial figure.

“While Paul Alexander graduated with a Ph.D. in health research methodologies from McMaster in 2015, he is not currently teaching and he is not paid by the university for his contract role as a part-time assistant professor,” said Susan Emigh, a McMaster spokesperson, told the Post. “As a consultant, he is not speaking on behalf of McMaster University or the Department of Health Research Methods, Evidence, and Impact.”

Google to launch Pixel 5, new Chromecast, and more on September 30