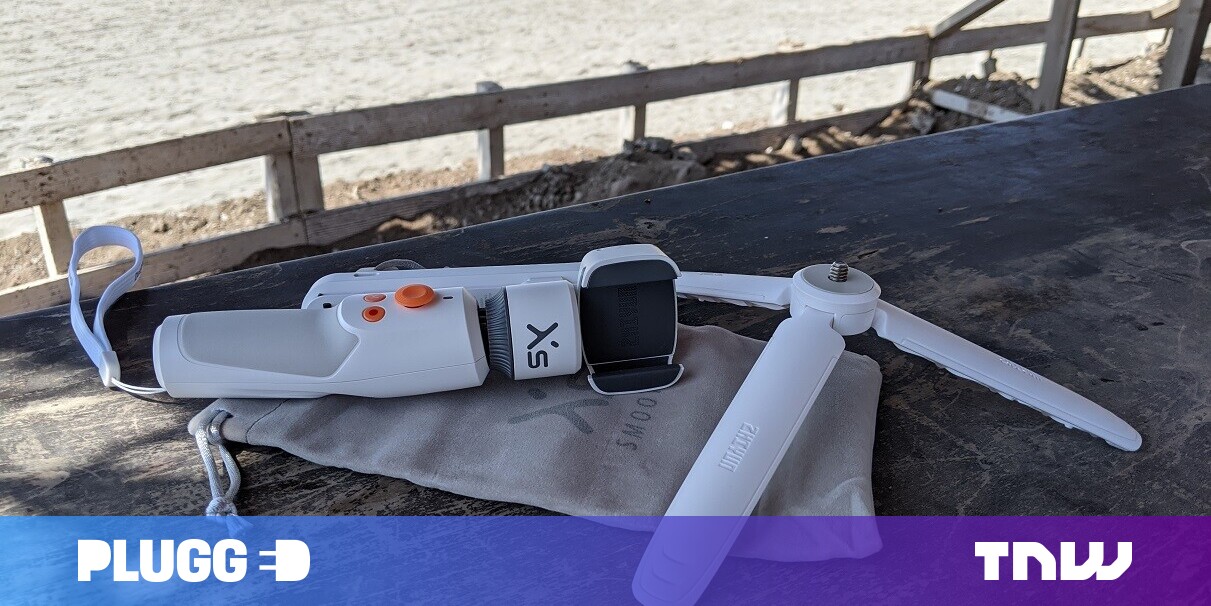 The Smooth XS from Zhiyun is an interesting take on the smartphone gimbal that attempts to snuggle the space between prosumer and novice gear. In many respects it passes with flying colors. The build quality, cost, and usability are all excellent in this gadget. But there are some cons here that could be deal breakers for some users.

First off, this is a two-axis gimbal that only works with its own app. Before you read any further you should decide whether you’re shopping for a gimbal or a selfie stick. Because if you need a 3-axis gimbal for walking, riding, driving, or other shots that are bound to have vertical bumpiness or you need to shoot in a specific app (like, for instance, the camera app on your phone), you’re not going to want this device.

If you can live with a 2-axis gimbal that only works with a proprietary app, then this is a pretty damn good selfie stick.

Let’s start with the good. Ease-of-use is off the charts here. You download the app, connect your phone to the gimbal via Bluetooth, and register your device. From there you can use the app to shoot video, photos, panoramas, time-lapses, and “smart” stories. The app is apparently intended to appeal to streamers and other high-end selfie stick users.

That is to say, this isn’t professional filmmaking gear. In the era of iPhone films you’ll still need a 3-axis gimbal that works with your camera app of choice, but the Smooth XS clearly fits a niche — one filled with people who use their phone’s front camera more than its rear one.

On the operational side, the Smooth XS is… well, smooth. It’s nearly silent and quick to respond to movements. Honestly, it feels like it’s tracking my subjects pretty well and I was impressed by how quickly I was able to forget I was holding a contraption and just focus on shooting.

The best thing about the Smooth XS is its build. This is a relatively small gadget compared to its competitors from DJI and others. It’ll fit in the side pocket of your backpack (or easily in your fanny pack, if that’s your thing) and it only weighs a few ounces. I really like the telescoping extension arm and the sliding holding mechanism. It’s plasticky, which might lead some folks to believe it’s cheap, but that keeps down on the weight — something I appreciated during long recording sessions.

It features a pan and rotate button, multifunction button that controls settings in the app, a power button, a record/shutter button, and a zoom button. There aren’t any bells or whistles here, but you get everything you need and it’s easily accessed with one hand.

If I could stop the review right here, I’d tell you go buy this thing right now. But we have to talk about this app first.

It’s abysmal, but you can use it. I’m not going to take the time to remember its name or take screenshots of it because it doesn’t deserve that much attention. I can only assume the reason why you’re forced to register the device within the app and use it exclusively with the app is so the company can rake in advertising dollars. It’s also possible the app is gathering data, but anytime you use a photography app you’re probably training an AI so it’s best just to assume that’s always the case.

The app has most of what you’ll need to record, edit, and broadcast your videos. Thankfully, once you’ve shot your footage you can always edit it in another app if you’d like.  On the plus side, the app does contain several tutorial videos that are immediately useful.

The bottom line: I like this product. If I could use my own camera app I’d be completely satisfied, but without that option it’s tough for me to recommend. I can get over not having the third (tilt) axis, but being limited to only shooting in the Zhiyun app is a borderline deal-breaker for me.

However, the price is right. At just $74.99 I’d classify this as one of the better selfie sticks out there. If you’re cool shooting in the app, this thing is a great upgrade from simple telescope sticks for people who don’t want to drop $200 or $300 on a DJI gimbal.

You can order directly from the Zhiyun store here, or on amazon by clicking here.

Did you know we have an online event about product design coming up? Join the Sprint track at TNW2020 to explore the latest trends and emerging best practices in product development.

Tesla says its battery innovations will deliver its goal of a $25,000 mass market electric car

Chitin could be used to build tools and habitats on Mars, study finds