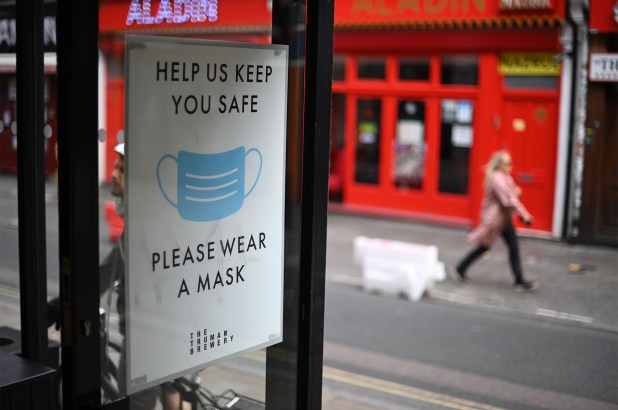 A sign advising people to wear a face mask is shown on the door of a business in London.
AFP via Getty Images

A UK government science adviser warned Sunday that ongoing lockdowns just “defer the problem” — and warned that a third wave of the coronavirus next year is “entirely possible.”

Mark Woolhouse, who sits on Britain’s Scientific Pandemic Influenza Group on Modelling (SPI-M), dismissed the UK’s latest lockdown as trying to “stick this out for another six months” in the vague hope a vaccine will become widely available.

“I have to say that most people I have talked to who are involved in vaccine development think that we may have a vaccine in six months, but it is doubtful that we will have been able to roll it out on a mass scale by that time,” he said on the BBC’s Andrew Marr show.

“So we are in a difficult situation for some months to come I am afraid,” he warned as a second wave devastates Europe.

Modeling suggests that a third wave is “entirely possible,” he warned.

“This is just another demo that lockdown doesn’t solve the problem, it defers it,” he said.

“That is why we need some kind of cavalry on the horizon or, alternatively, if we think that vaccine is not going to be available in six months, or 12 months or two years or whenever it may be, that we do need alternatives.”

All your questions about how to wear a face mask –